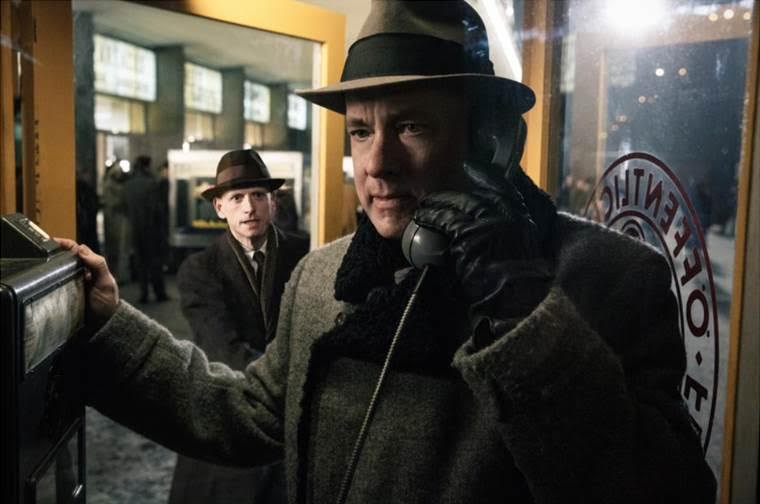 Needless to say, Bridge of Spies was a great movie, one of the best I've had the pleasure to review so far. With the combined intensity of being a mostly true historical story, it is also viably heartwarming for those of us with a working moral compass.

Taking place during the Cold War between Soviet Russia and the United States, Donovan is an American attorney tasked, at first, with defending a Soviet spy in what the government called a 'fair' trial. If that wasn't hard enough, Donovan was then given the patriotic duty of organizing a trade between the Soviet spy he had grown fond of and an American U-2 spy plane pilot captured by the Soviet who had failed to 'die for his country'.

In a play for power, Germany leveraged their own prisoner, a University Student who was unlucky enough to be captured within East Germany after the completion of the Berlin Wall.

Unable to leave an innocent man in the hands of cold and aggressive soldiers, Donovan attempted to leverage his Soviet spy Rudolf Able, for both the American pilot and the student.

Between the legal talk and the lack of subtitles during both Russian and German language exchanges, I was surprised to note that I could keep up with the plot perfectly. As a human being who cares about other human beings, I related to Donovan's will to rescue both the pilot and the student, and I found myself repeating a rather important quote the entire time I watched Donovan struggle with opposing government representatives.

The quote itself is important and you will no doubt catch on the very first time you hear it.

I for one, recommend this historical drama for anyone with the ability to understand it.