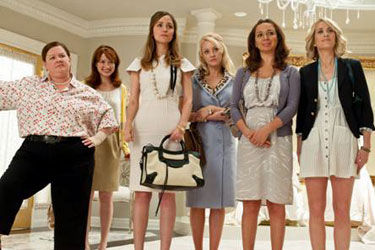 
Bridesmaids is a series of comical situations which could stand alone but are strung together by a thin line revolving around a wedding.

Wiig's Annie feels the looser as she approaches the job of being maid-of-honor for her lifelong friend Lillian (Rudolph). Annie is confronted by the new sister-in-law (Rose Byrne) who can't control her need to mold the wedding into her vision of a perfect marriage day.

The film deals with the relationships of women, the good, bad and the ugly. But also draws a different conclusion that would be the case with men.

The many adventures mostly embarrassing to Annie bring comical situations and in some cases course and vulgar language which are the punch lines. The film opens with Annie in bed having sex in many different positions and doing it quite well according to her casual lover who has no future plans with her.

Wiig who helped pen the film carries the film quite well. Each of the problems and twists which are mildly related, work under her convincing performance as a single woman, some better than others.

The comedy is rowdy at times but not so that the audience is turned off. This is not a classic but it is a good loose expression of what some see as contemporary life styles and the comedy that results.