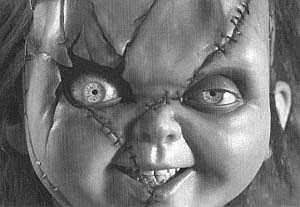 Tiffany, (Jennifer Tilly) longs for her evil lover Lee Ray who has occupied the dolly body of Chucky.  By using the book Voodoo for Dummies she congers up a spell after stitching the Chucky doll back together and brings back the dark evil Lee Ray in the body of Chucky.  Too quickly Tilly is then transformed from her sexy body into the doll Bride of Chucky.

Tilly carries a strange attraction to a film.  She spills sexuality all over while carrying out the part of a dim wit that is obviously tongue-in cheek.

If Chucky gets lucky can Son of Chucky be far behind?  A few clever lines flow before Tilly becomes plastic, she has a tarantula called Charlotte and she sheds tears while watching Bride of Frankenstein. Beyond the early scenes in which all the good lines are passed, the heart of the film is filled with repetitious bloody murders which are carried out as very dark comedy.

Jade (Katherine Heigl) and Jesse (Nick Stabile) are the innocent young couple drawn into the dark plot to put Chucky back into his Lee Ray's body.

The Chucky films may not be great cinema but they command a loyal large audience.  How do you argue with success.

It is rated R for violence and sex.