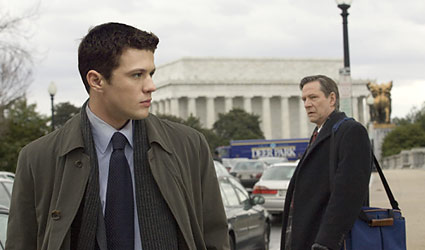 
We first see Chris Cooper's Robert Hanssen praying the rosary, a man dedicated to Catholicism, his family, and the United States of America. But we quickly learn he is like a priest who should be defrocked. After 25 years in the CIA as a dedicated God fearing loyal spy the agency has begun to believe he is the turncoat spy who is responsible for the death of agents and passing vital secret information to the Russians.

Knowing that much early on in the film could have produced a bland, dull, slow, word game with no excitement and tension. But screenwriters Adam Mazer and William Rotko move the dialogue in this psychological thriller with skill and imagination keeping us on the edge of our seat as Eric O'Neil (Ryan Phillippe) is placed close to the traitor to develop the case against him.

Hanssen spouts simple answers to complex questions, such as his reasoning for the fall of the USSR was the lack of belief in God. He hates women in pants, in particular Hillary, women should have children and be at home. His favorite music comes from the Andrew Sisters which places his mind back in the forties. But his perversions are deep and across the board, with a cross on the wall over his shoulder he views porn on his computer after pulling cables through the ceiling to protect from detection. His protective manner with his wife Bonnie (Kathleen Quinlan) is betrayed when he ships video's of his sexual relationship with her to Europe. His twisted life appears to come from an arrogant assessment that he is far more capable than others who have been promoted above him over the years. He is right about one thing he is considered the traitor who did the most harm to the United States, that has become his claim to fame.

The cat and mouse game between Hanssen and O'Neill brings us a thriller filled with tension with an atmosphere similar to Sleuth with O'Neill eventually winning the game using his quick mind and steel nerves - which nearly break under some of the pressure. He also carries the burden of his wife (Caroline Dhavernas) who has difficulty understanding many of his actions.

Laura Linney's Kate Burroughs creates further questions for O'Neill as she discloses her lonely life, without even a cat as she says. Does he want to become an agent and perhaps live a career and life like her?

While O'Neill has doubts in his mind, Hanssen is completely confident and arrogant in his twisted life. Ryan Phillippe's work continues to be more interesting over time and here he gives a performance that must be carried by skill there is little physical dramatic action and no help from special effects. What we see in Breach is skill from the two leads that bring tension and excitement, probably as it occurred.

Before Hanssen goes to Foxstone Park for the last drop, Cooper has confused all of us into thinking Hanssen is a perverted traitor, and yet a fine grandfather who we actually admire, a performer of less stature than Chris Cooper could not have carried us into that strange world.