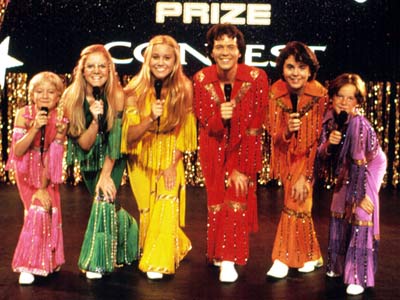 
The Bradys are like two dimensional characters, like paper doll cut outs floating in and out of the reality of 1995. Their idyllic existence doesn't collide with present day society. They are oblivious of how unusual they are and skim through each day, never taking offense at insults or being aware they are different.

The seventies TV show was unrealistic in its time and was no reflection of the Vietnam War atmosphere in the nation.

Th casting is perfect. Shelley Long and Gary Cole are the parents and the kids are: Christine Taylor as Marcia; jennifer Elise Cox as Jan; Olivia Hack as Cindy; Christopher Daniel Barnes as Greg; Paul Sutera as Peter; and Jesse Lee as Bobby. Alice the maid is played by Henrietta Mantel. Cameo appearances are made by Florence Henderson, the original mother, Ann B. Davis, the original maid, and Christopher Knight, the original Peter.

Three of the TV scripts form the plot for the film: the need for money to pay property tax; Marcia's swollen nose and difficulties with two dates; and Jan's fight between her good and bad side.

Too often old TV shows remade into films fail and the Brady Bunch Movie joins the crowd. There are some comical moments but over all there is one joke: A practically perfect family which dresses weird are up against the cynical society of the nineties. It works for a few minutes but not for long.