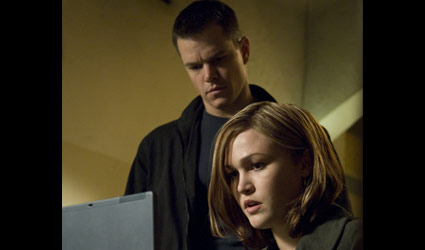 
Movie goers have been waiting all Summer for the big action film and here it is with a bang.

Novelist Robert Ludlum's amnesiac CIA agent Jason Bourne (Matt Damon) continues his quest for his identity in the third film in the series. At a point when the story might be winding down, the energy level starts cranking up a notch.

Bourne is beginning to piece together bits of his violent past and the reason behind the loss of his memory. Everything points to a super secret NSA program and as he gets closer to uncovering it, Noah Vosen (David Strathairn) the guy in charge of the CIA control room, has to keep him from the truth.

Bourne's recollection might be foggy, but he hasn't forgotten any of his killer instincts, and as he deflects the assassins that the Agency throws at him, they discover just how well he's been trained.

Action moves from London, Moscow, Morocco and ends in New York. Almost all of it is enhanced by a hand-held camera which makes you feel like you're inside the action. Each dangerous stunt is intense and realistic, no CGI here. A car chase is filmed from inside the vehicles and when hit at full force by another vehicle, we can almost feel the impact.

The best action scene has Bourne attempting to save computer expert Nicky (Julia Stiles) from a determined killer in Tangier. Jumping into open windows one floor down from neighboring buildings, slithering down narrow alleys and leaping over clothesline strewn rooftops, it's one of the most exciting cat and mouse games ever filmed.

Joan Allen returns as CIA investigator Pamela Landy and Albert Finney shows up as a doctor who works for the Agency.

Damon brings quiet strength to the role of Bourne. He's a killing machine that is coming to grips with what he's done and why.

Director Paul Greengrass (The Bourne Supremacy and United 93) leaves the door open for the damaged agent to return and I can hardly wait. In fact, I might just see this smart, gripping and very exciting film again.