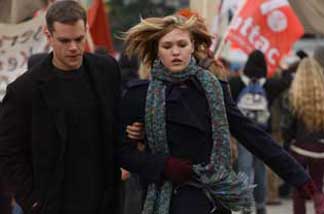 Matt Damon returns as CIA assassin Jason Bourne in this terrific spy thriller based on Robert Ludlum’s novel. He suffered amnesia and discovered he was an operative in 2002's Bourne Identity.

He’s still trying to piece his life together. He keeps a journal, jotting down bits of dreams and visuals that pop into his mind, anything that can help him remember the past.

He and his girlfriend from the first film (Franka Potente) are hiding on the shore in India. He wants to get away from all of the factions that are after him and live a normal life.

His tranquility is disrupted, when a stranger shows up asking questions. The chase that ensues is the first of many effective and exciting action scenes to follow.

Director Paul Greengrass puts us right in the middle of the action. The hand-held camera and close-ups have the effect of letting us experience each jolt and bump as if we were in the front seat of the car. He uses no fancy special effects, all of the action appears real, and people get hurt and bleed as a consequence of the action.

The story involves deputy CIA director, Pamela Landy (Joan Allen) who’s in charge of an undercover operation in Berlin. Something goes wrong during the mission and her men are killed. Millions are stolen and Bourne’s fingerprints are found at the scene.

Landy calls out all the forces to find Bourne whom she believes is a rogue agent, and he narrowly escapes one harrowing situation after another. He suffers car crashes, falling from dizzying heights, being beaten by a number of thugs and shot at from every angel. Through it all, we believe this smart, resourceful guy is truly experiencing all of this madness.

Damon is terrific as Bourne. He’s focused, purposeful and gives real humanity to his character. We feel for him, and unlike most movie heroes, we can see that this one just wants to rest somewhere and be left alone.

Allen is believable as a competent strong government employee.

Everything works here. The story is fast and involving, the characters are likeable and the action is intense. The Bourne Supremacy is a gripping adventure, and I can hardly wait for the next installment.

Back to Home Page