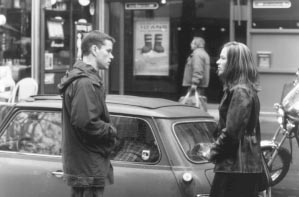 He's taken on board half dead with two bullets and a probe containing a numbered account in his back.  He has no idea who he is or how he ended up in the middle of sea.

What he does know is that for some reason he can memorize numbers and descriptions of many people in a room, speak fluent French and German and can disarm and render trained killers useless with lightning speed.

Once the boat drops him off, he heads straight to a Swiss bank where he uses the implanted information to get into a safety deposit box.  Inside he finds several phony passports in different names all with his photo, a very large amount of cash and a gun.

One of the passports is in the name of Jason Bourne, so he follows up on that lead, hoping to find out who he is.

I'm not giving anything away by explaining that he's a CIA assassin, and his boss (Chris Cooper) is using all available gadgets and surveillance to find and perhaps kill him.

Bourne ends up offering money to a young woman (Franka Pontente - Run Lola Run) to drive him from Zurich to Paris; for the remainder of the film the two are on the run.

A great car chase with Bourne driving, in what looks like less than the Volkswagen "Bug," perhaps a European "Gnat."  The car is so small, he's able to maneuver it down narrow streets, sneak in and out of on-coming traffic (as he's usually traveling the wrong way on one-way streets), driving up on sidewalks, or even careening down steep staircases with ease.

The fight scenes are first rate.  Close camera work on each economical jab and chop allow us to get very near to the action.  So close, in fact, that we almost wince when a bone is broken or someone is thrown across the room with a thud.

Damon is perfect in this role.  He's obviously pumped up, so he looks strong and determined and has a clam, cool demeanor no matter what is thrown in his path.  Pontente is also to be admired; she's quirky and different looking, not a typical glamour-girl, female lead.

Even though The Bourne Identity is based on Robert Ludlum's 1980 spy novel, this film is a very effective and timely action thriller.