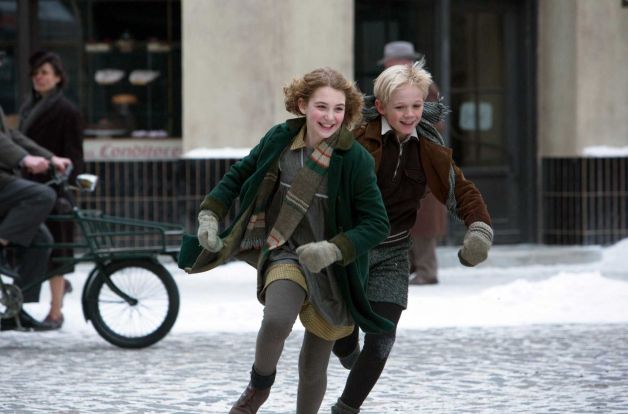 
An adaptation of an internationally beloved novel by Marcus Zusak is well-intentioned and considers the darker aspects of World War II. As nuanced as The Book Thief (in English and German) can be considered it doesn't really relate an imaginative dramatically rich experience.

Not to say that stars like Geoffrey Rush, Emily Watson, and newcomer Sophie Nelisse don't offer compelling characterizations in what can be heartfelt especially as it draws to a close. Even if some might be put off by some egregious (modern-day) product-placement.

Nelisse's young teenage blonde, blue-eyed Liesel Memminger becomes fascinated with books and reading just prior to their society in a state of war and hopefully that will encourage some of the target audience. The streamlined approach by scenarist Michael Petroni does consider the possibilities of being drawn into a pervasive Fascist ideology.

Liesel's mother has tenets that gives her pause during rituals like book burning in the affirmation of adopting a cause. She is transported into foster care into lower-class German parents, Hans (Rush) and Rosa (Watson) Hubermann, who are able to receive government benefits, and don't advocate the powerful political pulse of their nation.

Liesel has some tension with her new 'clad in thunder' mom (as Watson's role in a way mirrors what she did for Steven Spielberg in the elegant War Horse) but Hans sparks a new interest in her by teaching her how to read. There is definitely a palpable rapport between Rush and the adorable wide-eyed Nelisse.

The story becomes a tale of survival as Liesel befriends a neighborhood boy Rudy and Max (Ben Schentzer showing some promise as an actor) a young Jewish man her new parents provide refuge in their basement.

Brian Percival (known for his work on the smash hit series Downton Abbey) keeps things moving fairly briskly abetted by crisply lush images from cinematographer Florian Ballhus. Conveying Liesel's attraction to storytelling to her existence is crucial, but the way the situations unfold in a timeline which may seem much shorter (save some dialogue) than it is underlines the difficulty in retaining a luster that channels the turbulence and struggles as a winning fable in the translation.

Nevertheless, even if The Book Thief falls short of similarly ambitious fare (like Sarah's Key which connected its chronology quite well) a notion of thought and curiosity amidst a country filled with swastikas can easily fit the bill as a cinematic educational tool that parents and children can enjoy together. Especially when Rush and Nelisse occupy the screen together as the absurd voice-over spector (Roger Allam) looms over everyone.