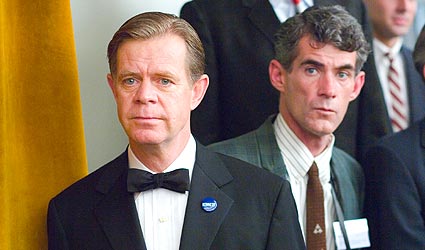 
Emilio Estevez's ambitious, if overly fragmented Bobby aims to do more than honor a vital political figure in the wake of Martin Luther King's assassination.

With all the stories linked by one event, the sprawling tale scripted by Estevez (who also co-stars) has much in common with the approach of Robert Altman and Paul Haggis who co-wrote Crash.

Many narrative branches are to interlock, maybe with some dangling threads; still Estevez creates much feeling for time and place with more than two score speaking parts.

The setting is Bobby Kennedy's campaign headquarters, Los Angeles' Ambassador Hotel on June 4, 1968 when the California primary was held.

Lindsay Lohan is a lovelorn young woman about to marry a friend (Elijah Wood) which will keep him out of the escalating Vietnam conflict.

There is racial tension as seen through a group of kitchen workers (Freddy Rodriquez, Lawrence Fishburne, Jacob Vargas, Christian Slater).

Those toiling or dropping acid during the campaign are played by Joshua Jackson, Nick Cannon, Brian Geraghty, and Shia LaBeouf. Is thier man just the light to get America out of its dark unsettledness?

Sometimes the interconnected short cuts seem more suited for the small screen, as they build during the evening Kennedy was gunned down by Sirhan Sirhan. Certain threads don't always click like others, especially those with couples problems (Estevez and Demi Moore, Helen Hunt and Charlie Sheen). Even the interaction between Harry Belafonte and Anthony Hopkins playing chess in the lobby.

The dialogue and look around each vignette latches onto more versimilitude than expected, identifiable in the current, rather chaotic global state of things.

If Ashton Kutcher is flat as a hippy dealer than Stone and Lohan (very good in A Prarie Home Companion) give emotional shadings to their inviting segments. And, Macy, no stranger to this kind of format from Magnolia, is effective as the fulcrum of it all, similar to the Don Cheadle detective role in Crash.

Estevez works with detail for the period, especially from an editing standpoint, as archival footage and Kennedy's own words have a prescient, stirring quality, often displayed in the background on TV monitors. Bobby is a telling story that has a memorable conclusion, strikingly commenting on violence in America.