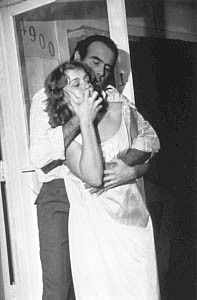 Blood Simple is the movie that marked the debut of Joel and Ethan Coen.  Over 16 years since this taut nourishing thriller they've made seven more films including Fargo, a dark, witty, offbeat film that riveted those who saw it.

The Coens, with Joel the director and writer and Ethan his collaborator and usual producer, have gotten the most out of lead character Frances McDorman (Joel's wife).  Far from the cold, bleak landscape of Fargo, Blood Simple is set deep in the heart of Texas.  The newly polished director's cut with digitally mixed sound enhances the vitality of the small, detailed feature that sustains viewer interest not just through the milieu of four characters, but the minimalist, visually intrusive style of film making, that evokes a sense of independent work.

This offbeat, low budget Texas film noir centers on a quartet of characters who are linked together, though they don't all know each other.  There's an extramarital affair between Ray (John Getz), a slippery bartender, and Abby (McDormand), the wife of Ray's boss.  The opening shot is on a long desolate roadway as night falls and Ray and Abby are talking in a car.  The Coens bring attention to the rain pelting on the windshield as a musty looking old Volkswagen lurks behind.

Marty, a despondent Dan Hedaya, is the husband who has private detective (M. Emmet Walsh) on the trail to prove Abby's extracurricular activities.  Eventually the maddened Marty requests the investigator to ice Ray and his wife for ten grand.

Marty is sent on a fishing trip while the detective plots the murder.  But there is no guarantee and this intimate double double cross, offbeat, mordant tale echoes the later Fargo in the manner the characters react to a situation that has misunderstandings.

Throughout, the Coens create an aura of dark irony speckled with wit, as Barry Sonnefeld's striking lensing adds to the danger and suspicions swelling in and out of the bar where a murder has been committed.

This restored Blood Simple has its eyes and ears in places that Hitchcock would admire particularly with the piano score by Carter Burwell.  No one is safe in this eerie noir.  Blood Simple is an indelible, stark resonating film from two gifted siblings.