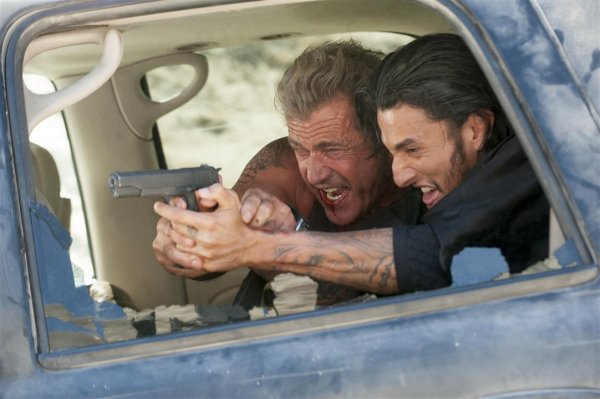 
Jean-Francois Richet's Blood Father might seem like another version of Taken, but it has some interesting wrinkles of its own, not just what encompasses much of Mel Gibson's face these days.

The infamous actor of The Beaver and Edge of Darkness and upcoming helmer of Hacksaw Ridge returns to a welcome form epitomized by work in films (from the late '90s and early '00s) like The Patriot, Payback and We Were Soldiers.

Here he's hardened ex-con Jack Link dwelling in a barren, trashy environment with an ex-wife and estranged "off the rails" daughter Lydia (Erin Moriarity of the current well-received Captain Fantastic and The Kings of Summer).

The shopworn screenplay has Link coming to terms with his "bad ass" and paternal instincts when Lydia gets in trouble with a drug cartel headed by her boyfriend. The versatile Diego Luna (Milk, Elysium, and, later this year, Star Wars: Rogue One) elucidates a baneful presence as Jonah.

Still, there is a viable familial connection as Moriarity definitely holds her own opposite a tuckered Gibson (who last directed Apocalypto a decade ago) whose recovering addict unequivocally assuages the encumbrances, remorse, and love with palpable wounded, intense retribution. Also, William H. Macy (Room, The Lincoln Lawyer) is well-cast if in too limited of a role as the very amicable AA sponsor Kirby who provides plenty of moxie that Gibson uses to witty effect.

Richet (the remake of Assault on Precinct 13 and Mesrine Pts. 1 & 2) knows how to stage some startlingly taut, squirm-inducing scenes as genre fans wished a couple more edgy energetic scenes could have been included to a gritty production that underscores its modest budget. Gibson is far removed from his reliably handsome box-office mojo back when What Women Want (and even Chicken Run) appeared in multiplexes to the delight of studio heads. But, even those that wouldn't make any time for an iniquitous, despicable sort off-screen might be surprised that a man trying to rise from the ashes of despair still has some heart and soul left in his craft. And, it may very well extend to his continuing, undeterred work behind the camera.