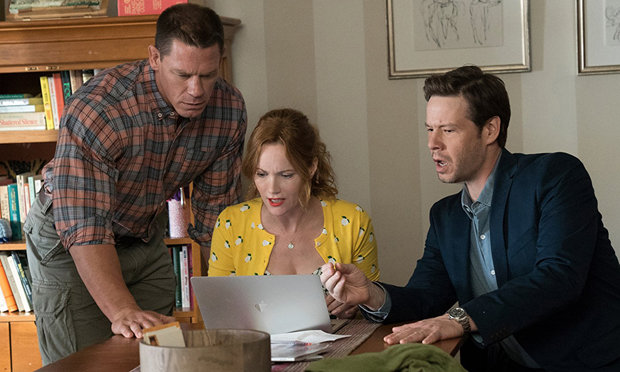 The one thing I found very surprising about this film was the on screen chemistry both groups had.  The girls felt and acted like genuine teenage friends and the adults acted exactly like the overprotective parents they are made to seem.  Everyone plays off each other very well with Kayla and Hunter being the standout characters in either group.  And at times I did find myself laughing at some of the jokes in the film.

However with that said I did find the movie as a whole to be rather unfunny in a cringe kind of way.  There are jokes that play out way too long and others that just fall flat.  As well, the film tries to force a few plot points that weren't really needed.  Also, I wanted to speak about the ending.  After everything happened the adults have what I can only see as the only true touching, if not emotional, moment in the film.  In many ways, this was the perfect ending for the film.  But instead as the film fades to black they simply cut to another scene to add one final incredibly unfunny joke that in my opinion ruined the moment the previous scene created.

In the end, Blockers is an ok film.  The characters are entertaining and work well together and some of the jokes received a chuckle here and there.  However, the jokes weren't nearly consistent enough for a comedy and with some forced messages and an ending that did more harm than good for the film I would say that this film, while harmless, is probably worth skipping.