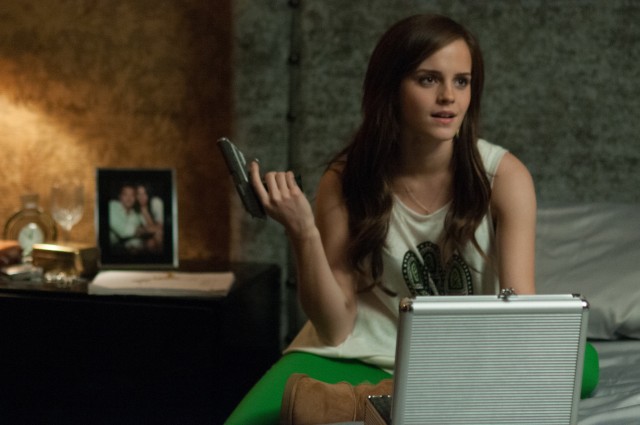 
Sophia Coppola is definitely in her element in her astonishment of a depiction of a media-obsessed, Facebook-oriented culture, not just from the San Fernando Valley setting.

Her fifth feature, The Bling Ring (based on actual events) is bolstered by a strong production employing a strapping rap soundtrack and lustrous lensing (in part by the late great Harris Savides). It doesn't have the intimacy and emotional surges of her best films like The Virgin Suicides and Lost In Translation in a story whose very nature is presented in impersonal, even tedious strokes.

Still, she's able to draw notable performances from inexperienced up-and-comers; here the likes of Katie Chang as Rebecca, Claire Julian as Chloe and Israel Broussard as a friend aspiring to quickly rise up in the fashion world. They hook up with young, brash Nicki, Emma Watson, harnessing some of the anarchic verve of the Seth Rogen/Evan Goldberg apocalyptic comedy This Is The End, and shedding her Harry Potter Hermione image, as well as adopted sister Sam (Taissa Farmiga, younger sister of Vera) and 13-year-old Emily (Georgia Park).

Coppola's gossamer of a script obviously doesn't overstay its welcome in its analysis of a group of teenage fan monitoring celebrities over the Internet/Satellite to get their fame by going on a crime spree. Her true-life account from a Vanity Fair article The Suspects Wore Louboutins has an honest, speculative feel to it as Reality TV stars like Paris Hilton (who has a cameo here) get stripped of jewelry, and designer wear among many items, cash and drugs that amount to a reported six-figure sum.

There is Nicki's unorthodox, self-help advocate mother (Leslie Mann of This Is 40) who eventually gets rightfully shaken as the judicial system takes precedence over her personal interest with A-listers like Angelina Jolie. The handling of the illicit hedonism may comes across as dramatically inert, at least, in its ramifications, though offering its share of social provocation. Watson makes an impact for the time she's allowed amid the ease with keys, car doors and security in an expose of southern California celebrity culture that a still youthful Coppola milks with finesse rather than depth in keeping a salient pulse on today's teens.