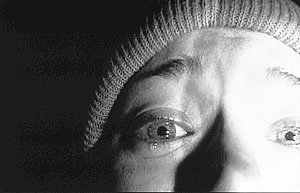 Daniel Myrick and Eduardo Sanchez are new to feature films and have received a great deal of attention for The Blair Witch Project; the attention may be deserved but the film leaves much to be desired.

On October 21, 1994 three young documentary film makers played by Heather Donahue, Joshua Leonard and Michael Williams drove their Chrysler Laser to the Black Hills Forest in Maryland to investigate and document the so-called Blair Witch murders.  In the early forties, seven children were ritualistically murdered by a hermit named Rustin Parr who claimed he did it for an old woman ghost who occupied the woods near his house.  Parr was hung for his crime.

Initially the three are relaxed singing the theme from Gilligan's Island and playfully using vulgarities to communicate.  The mood changes, gradually becoming more hectic, dangerous and frightening as the film progresses.

The woods in October are filled with dead leaves and the trees striped of their foliage appear dark and frightening.  The cold rain penetrates the body and for the three adventures who become lost, the lack of food and sound sleep begins to work on their minds.  The unanswered question at the end of the film remains: is the terror real or in their imagination!

The hand held camera is constantly in motion.  That technique gives some sense of realism, it also quickly becomes irritating.  The jerky motion and the ceaseless blurring of scenes limit clarity at critical points and removes any sense of fear or suspense.

The three characters constantly send a stream of four letter words at each other acting more like eighth grade children than talented young film makers.  They also fail to use common sense when attempting to escape the woods.  Follow the river, it has to come out somewhere, climb the tallest tree and look around, find a stone wall or path and stay on it are simple rules they never attempt to use.

The Blair Witch Project deserves a failing grade, it is irritating to watch and never provides us with a satisfactory explanation or conclusion.