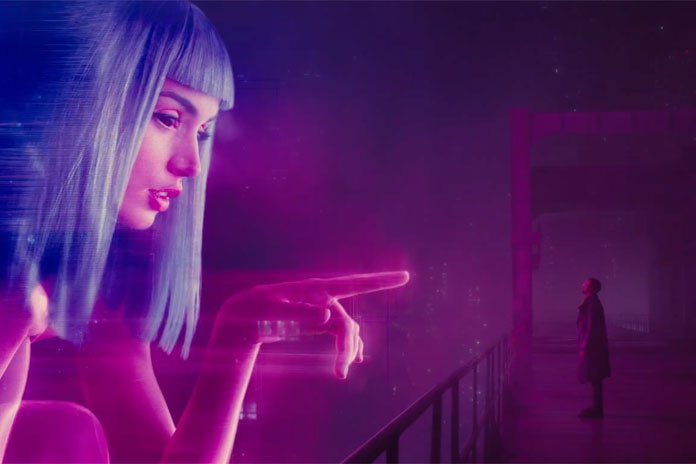 
Yuval Noah Harari in his best selling book Homo Deus: A Brief History of Tomorrow explores what will or could happen to humans as we move toward an unknown future.  Humans have already begun to use organ transplants and some artificial implants in human bodies.  Harari discusses how many implants will change a human as we now them into something else and at what point will the artificial implants or parts dominate the world of what we call humanity.  Blade Runner delves into that world in both the 1982 initial version and this new 2017 version.

Ryan Gosling's K is dispatched to locate Rick Deckard (Harrison Ford) who has been missing for thirty years by his supervisor Lieutenant Joshi (Robin Wright), his adventure is at the heart of 2049.  The world he travels in is a dark, wet desolate place filled with elements of a destroyed society that appears to be what exists today.  The dark world is in contrast to the spectacular vehicles he uses in his travels in search of images and illusions of the past.

K's companion is similar to what was called "furniture" in Soylent Green, (Joi) is beautifully cast and played by Ana de Armas as a digitally created entity who is quite like a perfect fifties dedicated loving wife who is flawless to look at and only brings happiness and support to the life of K.  She is obviously in contrast to Sean Young's Rachael from the original.  Rachael was beautiful, alluring and mysterious quite different from the girl next door type that Joi brings to K.

The illusions provided by the director of photography Roger Deakins are filled with despair and at the same time stunning beauty.  The colors spread through out the skies along with the dark rainy place which exists during much of the film they are in concert with and opposition to what appears to be a gray snow that falls from time to time.  But it is also easy to believe we are viewing a flying vehicle probably a police car as we would see it today which is believable both on the ground and in the atmosphere as K searches for Deckard.

Sets probably are limited in today's films and in some way it limits what can impress because most of what we see in the background and around the actors is all image projection from digital production.  If all the sets were compiled through art direction as in the past they would be significantly impressive.  The music sound track is blasting at times but always effective and from time to time we observe performers form the past in image projection as they perform.  Frank Sinatra, and Elvis have screen time from what looks like grand productions from Las Vegas performances.

As K searches for Deckard the plot deals with what is apparently the possibility of a mating of androids and humans and what the result of that union might result in.  K constantly is reminded of a small wooden horse with 6/10/21 carved on it.  Does it have meaning just to him or is it part of the larger searching plot for a man who disappeared thirty years before which is at the heart of the story.

There are many outstanding images produced, but the 1982 version remains stronger in that category with streets and cities filled with various lights of many colors and combinations.  This production is more subdued more quiet even during the action scenes, and K many times uses just expressions rather than words.

Gosling is the star but just as Sean Young is remembered in the 1982 version Ana de Armas dominates here.  They appear different but provide the same category of character.  Each is not real, has a human character but is bound by a constructed existence, that combined with the beauty they provide makes them stand out.

With all that is interesting and attractive Blade Runner 2049 which takes 163 minutes to tell its story is long for a film.  Often scenes last too long and the silent performance of Gosling's K at times begs for quicker verbal responses.

In 1982 Blade Runner was a spectacular new world in film, in 2017 it's a little more ordinary.