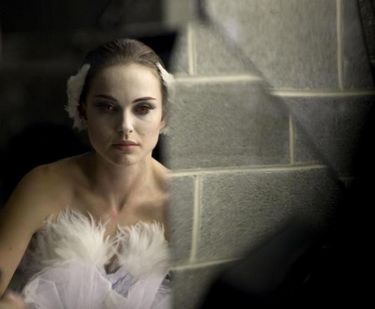 
Darren Aronofsky's latest insightful low-budgeter is set in the upscale very competitive ballet world having a more pronounced distaff side to it. Definitely a change from the more sordid milieu of The Wrestler, remembered for an Oscar-worthy star (called a comeback by many) turn by Mickey Rourke.

Black Swan, referring to the sensual role in the renowned Tchaikovsky ballet Swan Lake, stars Natalie Portman, Vincent Cassel, Mila Kunis, Barbara Hershey and Winona Ryder. It has that bleached-out look to exemplify an ominous aesthetic and complexity of dancers where various internal and external forces define their personal ambitions.

Many commentators may see this meaty, intense psychological drama or frightfest (if you will) influenced by a seminal ballet film like The Red Shoes or a little over a generation ago with The Turning Point which featured the late Anne Bancroft and Shirley MacLaine. Or in its mood and relational angst like All About Eve with Anne Baxter and Bette Davis.

One thing is clear again, the actors, especially the versatile Portman (Brothers and Closer) and Kunis (Forgetting Sarah Marshall), embrace an oddly unnerving vision by a helmer who strips down the refined to its raw, gritty elements. The former etches quite a fascinating character in Nina, a naif innocent of a ballerina just coming into her own as a young adult with much obsession in her professional life.

Initially, Nina subconsciously yearns of being the highlight of Tchaikovsky's masterpiece, but a grueling season at Lincoln Center awaits her where she must learn a complicated dance to realize such a prestigious role.

In the creditable elaborating by Aronofsky's scribes, including story creator Andrew Heinz, the veteran in Nina has to deal with an eerie, imperious stage mother (Hershey, in a fine diva return), as well as well as the company's magnetic French director Thomas Leroy (Cassel, very good in Mesrine: Killer Instinct). When a new ingenue and rival emerges in the form of a double in Lily, a very alluring, intuitive and unpredictable Kunis, Black Swan begins to swirl in more wryly caustic, albeit lurid ways. Maybe for a few viewers who were taken aback by Aronofsky's turbulent, explicit (remember the pupil) detachment in his Requiem of a Dream.

Through the adroit archetypal approach of the filmmaking amplified by some sharp undulations in the original score by Clint Mansell and sound design with the artful classical accompaniment, romanticism and idealism bleed out as in the hues that a self-doubting Nina carries like stigmata. Later, a sapphic connection is insinuated when the proceedings border on the perverse and sadomasochistic.

Something like this has the wherewithal and functionality to reach more than discerning art house patrons, of course, with the right touch when it comes to today's far-reaching advertising campaigns. It goes without saying Portman exudes much presence that should garner much attention this awards season with the need to succeed for Nina having the kind of arc of dark perception that a performer relishes.

In this vividly substantial ballet and backstage "behind-the-scenes" that the late Robert Altman handled with varying shadings and texture in The Company with Neve Campbell, the clash of wills and personalities in this art-filled subculture is dangerously relevant. It's nice to have what Cassel can provide as the steely svengali figure who has been close with his lead performers like Ryder's unstable Beth MacIntyre whose vicissitudes are shown in flashbacks.

A case can be made for the interpretative merits of what has strange evocative intricacies to it as something with  theatrical nobility attached to it can get hard or down-and-dirty when embracing mental anxiety through macabre, menacing strokes