Birth of a Nation 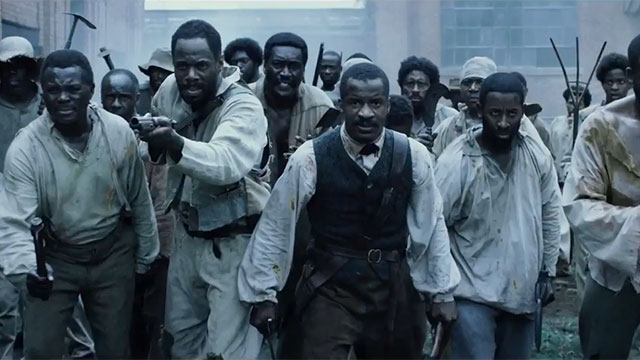 The Birth of a Nation, in enkindling biopic fashion, centers on a heady and later charged Nat Turner (played mostly by Parker) who learned to read at a young age, very influenced by the Bible, and finally was enabled to "smite the oppressor". The ardor for this endeavor is evident by Parker who turned down many roles to get this low-budgeter made, who displays much ambition and earnestness in a debut behind the camera. For the record, controversy has haunted Parker and co-scenarist Jean Celestin from allegations, a conviction and appeal by an unconscious woman at Penn State who tragically later committed suicide.

The multi-tasking, for the most part, pays off in a timely fashion that should induce much audience reaction given the continuous wave of racial friction occurring in American law enforcement (prompting #blacklivesmatter, e.g.). A conventional, less shaded portrait is presented with surges of visceral animosity leading to a climactic assault against Caucasian slaveholders in which some three score were killed, mainly by knives and axes.

The filmmaking delivers on the production front with resonant contributions in the lensing and music department from, Eliot Davis and Henry Jackman, respectively, to accentuate the locations and motivations, as well as shifting moods carefully judged in many scenes. Parker ably works from an 1831 Southampton, Va. setting where Nat picked cotton and was fairly well-treated on a plantation by a master under financial duress, Samuel Turner (an effective Armie Hammer of The Man From U.N.C.L.E., The Lone Ranger).

The subtext of religious underpinnings helps to give meaning to the slave's interpretations of a "peculiar institution", not to mention scripture passages and astronomical events in stoking the transformation of a "prophet". Turner's mother (Penelope Ann Miller) nudged him into a life where he would become a preacher to those of his ilk for profit from the inclusion of a Holy Book. As Nat's inclinations have clarity the thrust of his fellow uprising cohorts really don't ignite the broader socio-political or ethical implications. Especially involving the change or revelation of an impetus from the purest, even final expression of radical love. From someone who has demonstrated much patience and kindness towards others.

Bigotry and flagellation would lead to some telling shots of a significant point in history never captured on celluloid up to this point. A baptism and attending a soiree would prompt unsettling abusive sequences though less lurid than some might expect. The use of a chisel after a hunger strike is another example of the fierce prejudice in action.

Aja Naomi King as Cherry,  Aunjanue Ellis as Nancy, and Gabrielle Union are fine among the distaff members, the former ones being most close to Nat, and the latter the wife of fellow slave persuaded by a lewd owner. Parker is the obvious linchpin in a rather powerful provident turn, and Hammer makes for a credibly conflicted possessor who might have been less intolerant had things not gone the way they did. And, Jackie Earle Haley (fondly remembered from pictures like Watchmen and Little Children) is a very vile presence as a slave tracker who has a most violent confrontation.

Here is a case of a filmmaker provocatively making a case to be a bold variant on Griffith though ultimately without the dramatic and narrative momentum to gravitate into an amazing, graceful poignancy felt in Steve McQueen's Oscar-winning 12 Years a Slave. What should be a must-see silver-screen experience (not withstanding Hollywood's struggle to come to terms with 'diversity') still provides noticeable blunt cinematic force trauma that will linger afterwards.