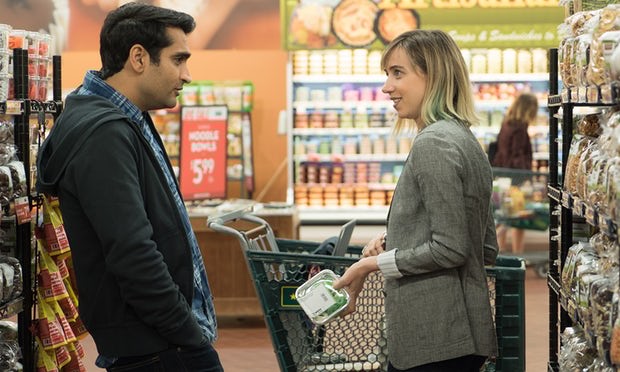 
Michael Showalter (Hello, My Name is Doris) teams up with producer Judd Apatow (Funny People, This Is 40) for a quite complaisant, if intemperate romantic comedy that boasts an endearing portrait from Pakistani-American comedian Kumail Nanjiani (known for his work on the HBO series Silicon Valley).

The Big Sick nicely undermines genre traditions and stereotypes in what is based on the life of Nanjiani (who plays himself and is a screenwriter) and wife Emily V. Gordon (his co-scenarist), working off of a mysterious illness with quotidian exactitude.

You can tell from the way the material is executed that a sharp mutual trust exists between Showalter, Apatow, and the writers to let it breathe with a truthful, adept personal imprint. The result leading to more sidesplitting interludes than anticipated.

Kumail handles the Chicago comedy circuit with a certain sufficiency (after being an UBER driver during normal hours) while holed up in a dingy flat with a less accomplished colleague when striking up a relationship with Kazan's Emily. It leads to her wanting a commitment from Kumail as he faces pressure from his folks to submit to Pakistani custom of arranged marriage.

A kind of departure emerges that turns out to be most welcome under precarious circumstances in trying to unmask one's true self has Kumail getting to know Emily's parents, nicely parlayed by Holly Hunter and Ray Romano. The former especially stands out in a sequence when Kumail gets ribbed by a patron during one of his routines.

It's clear that the realistic situations extend to the stellar rapport between Nanjiani and a fine Kazan (Meek's Cutoff, Revolutionary Road, and Our Brand is Crisis). With Apatow's backing and Showalter's relaxed efficiency behind the camera (balancing the jocular and dramatic) we'll see if Nanjiani will get the same kind of professional surge that the likes of Steve Carell, Seth Rogen and Amy Schumer received from the producer/director. From his charismatic presence in The Big Sick it's a breakthrough that should undoubtedly earn him more opportunities on the silver screen.