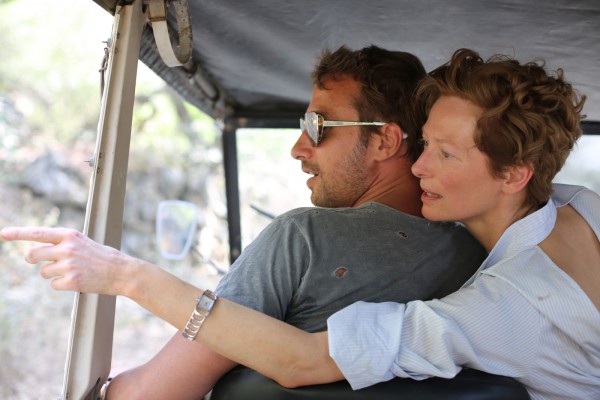 
Luca Guadagnino's latest adult, ambitious drama carries fun and frolic while finally unleashing an unexpected saturnine streak without the ideal emotional spark. He reinterprets, with a degree of success, the 1969 French classic, La Piscine in English, for the most part, that delves into an antiseptic side of fame.

Still, A Bigger Splash makes much of its remote, sublime Mediterranean location and initial cheery atmosphere, along with a varied, accomplished cast - Ralph Fiennes, Tilda Swinton, Matthias Schoenaerts, and Dakota Johnson (Fifty Shades of Grey). Perhaps the overall effect is like the motivations and interesting gesticulations between their characters which can add up to something delightfully thorny but at times enervating from the investment in juicy stuff like love and jealousy.

Swinton's Marianne Lane is like a glam rock goddess recovering from a throat operation (so her communication vocally is spare yet convincing especially from her visage) on volcanic Pantelleria island enjoying the company of filmmaker Paul (Schoenaerts of Rust and Bone in an ambivalent moody turn). Their interloper is Fiennes's record producer Harry (Marianne's estranged old flame) with nubile daughter Penelope (or Penny), a "lovely bit", as endowed with some 'Lolita' flavor by Johnson.

The shifty screenplay by David Kajganich which includes illegal immigrants and authorities senses the carnal pleasures in accordance with a crisp production, especially in the lensing and music where the Rolling Stones and classical artists are infused. An audacity with peril lurking is felt as Harry feels revitalized in the presence of Marianne, while Penny becomes more than coquettish with Paul.

The settings, whether a parched seascape or isolated pond, allow for a bare serenity to be shaken in hypnotic, if hyperactive ways (a bit like Harry himself). Fiennes knows how to let Harry be ingratiating given his gratuitous, yet witty nature that elicits a suaveness even projected in his more worldly type in The Grand Budapest Hotel. Swinton (very good in Jim Jarmusch's Only Lovers Left Alive and also in Budapest Hotel) oozes more vulnerability here as Marianne's tenuous feelings are more tangible than expected. And, works nearly as well under Guadagnino as in the more coherent and dramatically nourished I Am Love.

This often sprightly Splash could have been more poignantly intensified if the tension and denouement could have been more fully realized given how cagey the suggestiveness from the characterizations are portrayed. As indescribable as portions can be regarding regret and concern not to lose what is crucial to dignity, a sensitivity to a swooning, hypnagogic concupiscence maybe is just enough in yonder's way. Like its far-out, so beautifully rendered idyllic sun-dappled location.