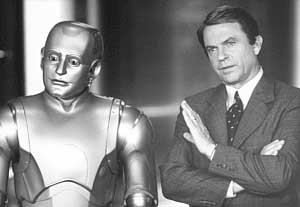 What a wonderful premise for a movie...a robot that becomes self aware.

Robin Williams uses his considerable talent as a robot, just off the production line, that is different.  This difference manifests itself in curiosity and innocence.  The only problem is a disjointed script and a poor story line.

What resulted were bland characters, miserable special effects and a story that could have been told in 30 minutes.

Robin Williams with his great comedic timing does a good job with the material he has been given, but the time gaps, technology issues and the greater moral issues that are left either unexplained or untouched are insurmountable.  Williams does deliver a few good lines, but never is given an opportunity to truly shine.

This is a great subject and hopefully will be revisited with a deeper examination of the technology (only Asmov's "3 Laws of Robotics" were used here), better special effects and a more solid and dignified treatment of the social, moral and religious issues.