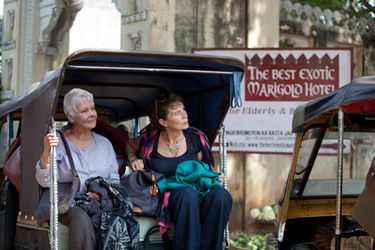 
Appealing most to those approaching or in their golden years, this unassuming (read early summer counter programming) dramedy  has enough warmth from its well-seasoned cast and its authentic locations gorgeously bathed in a variety of hues by lenser Ben Davis even if its intended themes don't provide considerable impact.

The Best Exotic Marigold Hotel stars Judi Dench, Maggie Smith, Bill Nighy, and Tom Wilkinson, among others as Ol Parker's script from a Deborah Moggach novel tries to get a firm handle on "outsourcing" of retirement. Perhaps in too much of a formulaic, graceful way with limited character development from its very seasoned ensemble.

A group at the airport are on their way to Rajasthan, India from England. It works for those like Muriel (Smith) in order to help her get a new hip and Dench's Evelyn left in a precarious state by her late husband. Put upon hubby Douglas (Nighy of Harry Potter and the Deathly Hallows Pt.2) and wife Jean (an unsympathetic Penelope Wilton of Calendar Girls and Woody Allen's Match Point) aren't able to live comfortably where they've lived for so long. The manager, Sonny (Dev Patel), of the hotel where they end up has embellished the quality of their new living arrangements (as its name includes The Elderly and Beautiful) a bit as evidenced when he's first seen with a paint brush.

Madge (Celia Imrie) and Norman (Ronald Pickup) are aboard for a new opportunity to find happiness later in life by exploring the older dating scene while Wilkinson's retired judge Graham sees an important need for closure in this foreign, yet alluring place where he once resided but doesn't recognize very much anymore.

Director John Madden, who just worked with Wilkinson in The Debt to generally solid effect, provides the necessary comfort zone, tranquil enough for the performers amid what was probably somewhat of a bustling, limited locational shoot. The dampened-down approach allows for some unsentimental, honest performances for thespians reacting to character life experiences which may mirror their own to a degree. How an individual path may turn depending on what hand they're dealt at this point in their lives provides the conflict which can be slight and tame.

The accomplished production doles out enough Indian flavor to accommodate interest in tourism and its promotion with a rather cheerful if a bit irritating Patel (best remembered from Slumdog Millionaire) not lost in the plotting with a fetching, hip girlfriend (Tena Desae) his no-nonsense mother (Lillete Dubey) isn't too keen on. It also doesn't bode well for him that the hotel's business hasn't been very profitable in a while. Lost love, a new lease on live and a local caregiver are in store for some of these folks, while for younger viewers Patel and Desae don't register together very convincingly.

Albeit one unpropitious turn, Madden perhaps has the tempo slanted against going an overwrought or very risky route which leads to something tame and tension-free. But, having Wilkinson as the sagely, longing emotional fulcrum, as well as a pert Nighy opposite a fine, against-type Wilton as the nagging wife, a down-to-earth sharpness of Dames Dench (who arguably has the most fully rounded character) and Smith (also remembered from Ladies In Lavender who gets shorter shrift until the last act when it comes to the accounts of the hotel), and the amusingly libertine etchings by Imrie (also of Calendar Girls and "Nanny McPhee") and Pickup offers enough delight in a very contemporary, international place.

Even as the illusion of its title indicates without much worrying, the demographic cognizant "grey pound" filmmaking cutely senses the possibility of enjoyment, but only really effective and affecting on the surface from the disparate willingness to accept what life has to offer in an energetic locale (even with chickens roaming the streets). Though as we're reminded on a couple of occasions from a voice-over from an increasingly computer-savvy character who is a part of the film's ominous surprise, "if it's not alright, it's probably not the end."