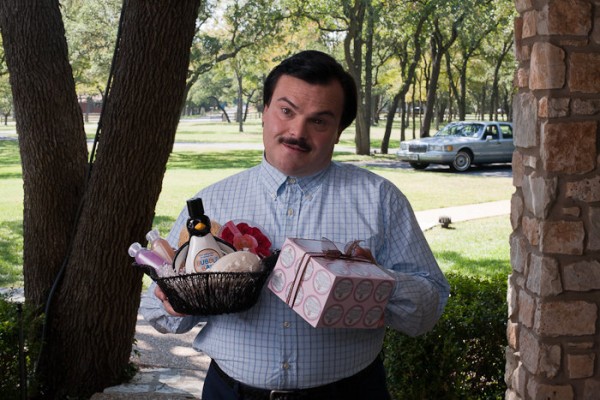 
Some deadpan hilarity is to be had in Richard Linklater's fly on-the-wall approach of a 1998 Texas Monthly article by co-scenarist Skip Hollandsworth.

The docu-dramedy Bernie stars Jack Black, Shirley MacLaine and Matthew McConaughey and is set in the east side of the Lone Star State, Carthage, with narration from the townsfolk about Black's Bernie and what led to the case against him in the murder of MacLaine's choleric, repressed, yet rapacious widow, Marjorie.

Effete mortician Bernie Tiede has fit in very well with his community, not only by handling the funerals but very active in the arts, serving as a stage director. Much older, spiky, wealthy Marjorie Nugent becomes a life-changer for Bernie as the socially detached woman will become his sugar-mama after he helps he with her finances and will while having the time to do some globe-trotting.

So, Linklater's satirical approach to a growingly real intense situation where Marjorie's body was found stuffed in a freezer with the interviewees (some of whom actual denizens during the actual events) commenting about Bernie is a testament to Black's comfort with the material to fashion a sympathetic, if low-key malleable character. Some of the line-readings have an acerbic, uproarious quality and the viewer's vantage helps Black take well-loved luminosity into more shadowy territory. The once very pudgy thespian takes advantage of his lead role through an assured physical presence which helps make the internalization of Bernie that much more credible.

As a cheeky commentary about close-knit places like Carthage and what the justice system entails, Bernie has a certain amusingly clever candor about it. Linklater and Hollandsworth are able to stage enough visual humor with dark, wry underpinnings where its overall winsomeness outlasts the strengths of an increasingly odd, if tepid tale. Even with its foibles it manages to keep Texas in a favorable light as MacLaine easily embraces the estranged widow and McConaughey (whose career had an early star-making turn in the director's intimate ensemble cult hit Dazed and Confused and effective more recently in The Lincoln Lawyer) evinces much disbelief and braggadocio as local District Attorney Buck Davidson. With enough subdued mordant cynicism, being kept off-balance is more pitch-perfect than where an inherent seriousness can lead.