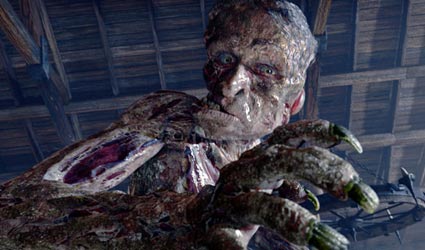 
Robert Zemeckis's new "animated" picture is geared to the 300 crowd as a sweeping, arguably arduous poem is presented in grand fashion. Had it been rendered in live-action, the rating would have reflected this sometimes glorious flesh-and-blood spectacle.

In Beowulf the performance-capture technique is advanced to magnify a richly textured tale that features quite an ensemble, including Anthony Hopkins, John Malkovich, and the philanthropic Angelina Jolie.

Hopkins acts out the part of King Hrothgar, a hedonistic man holding something forebodingly clandestine. He has a frosty wife Wealthow (Robin Wright Penn), along with a furtive aide in Unferth (Malkovich).

A wickedly deformed monster, Grendel (Crispin Glover) plunders through Hrothgar's mead hall, thus allowing for the title character, done by Ray Winstone (Sexy Beast, The Departed) to emerge to battle the hideous creature with its own issues.

The intrepid, handsomely imposing blond Scandanavian ends up securing a pact with Grendel's darkly seductive long-tailed mother (a perfectly cast Jolie) which will offer up a seemingly regal existence. But down the road, he'll be coming to terms with that when another fiery behemoth threatens to decimate his kingdom.

Scenarists Neil Gaiman (Stardust) and Roger Avary (Pulp Fiction) use some salty, raucous elements to bring some levity within a faithful adaptation that looks at the weight of one's ambitions and guilt. Action and romantic interludes aren't in short supply, as Zemeckis and his stellar visual effects team prowl adeptly from some panoramic settings. The result is quite pleasureable even as the most sanguine instances appear as a work of art; whether there are castles, damsels in distress, underwater chases, plunging swords or clattering arrows, it all is consistently, strikingly conveyed.

Beowulf, it must be said, is a must see in giant-formatted/IMAX screens with 3D, as the digitization process advances the expressions of characters and their movements. The technical result, for many, may outshine what was done in the magnificient, if somewhat oddly off-putting rendering of The Polar Express. Here, there is a vacuity mostly from the eyes that often keep them at a distance from the human realm even if the motion capture technicians appear to have found a synchronicity between their muscles and the face and body.

If most of the eyes don't have it here, it's not because of a mostly identifiable cast (much in the way of Final Fantasy - The Spirits Within). Most notably, tensile support comes from a golden Jolie, Malkovich, Wright Penn, and, notably, Brendan Gleeson as Beowulf's trusted, steadfast sidekick Wiglaf. The physical representation of a brawny, headband-wearing Winstone, though, seems closely hewed to the Sean Bean character in The Lord of the Rings: The Fellowship of the King. The actor probably didn't mind having his "appearance" and demeanor similar to Gerard Butler as Leonidas in the aforementioned 300. Winstone almost excels more in the character's haunted state than in virility, especially opposite the intense, hypnotic allure ably endowed by Jolie.

In this propulsive outing in Denmark in 507 AD when Christ Jesus was mentioned as a new god, the carnage and corporal has a gritty, lurid feel that engages the script and characters in ways that the reoccurrence of evil is a hard cycle to break. Even in this pulpy pop epic that does more for the eyes and ears than the heart and soul.