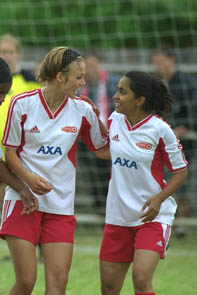 It won't be as popular in the U.S. as in Great Britain, but Bend It Like Beckham is more than a soccer film, like Billy Elliot was more than ballet.  Gurinder Chandra's lively, feel-good movie knows how to kick its way into your heart and funny bone in spite of a familiar turn into tradition and cross-cultural issues.

What keeps one from making leaps over the big obstacles is time-worn, but it works again like a direct free kick in a sport that has gotten more popular in the U.S. thanks to the success of women.

London teen Jess (Parminder Nagra) has very traditional Indian parents who look for spiritual help for their daughter.  Shades of My Big Fat Greek Wedding have them wanting Jess to be like her older sister (Archie Panjabi) and marry in her ethnic group and cook the fine native cuisine.

Jess idolizes the famous English soccer captain David Beckham, whose feat from the title relates how he can get the ball around the opponent's defensive wall, a mesmerizing corner kick.  Like kids wearing Kobie or Shaqu Lakers jerseys, she's dressing like Beckham with his No. 7 on much of the time.

Like Greek Wedding, a lot of the film's sincerity and energy comes from the way it explores through ethnicity.  A couple of the young characters might be tapped too much into the film's metaphor, but the parents come off as genuine and witty.

The ebullient Beckham bends around generations and culture through the charming turns and a soundtrack that reverberates for soccer gals and their families.