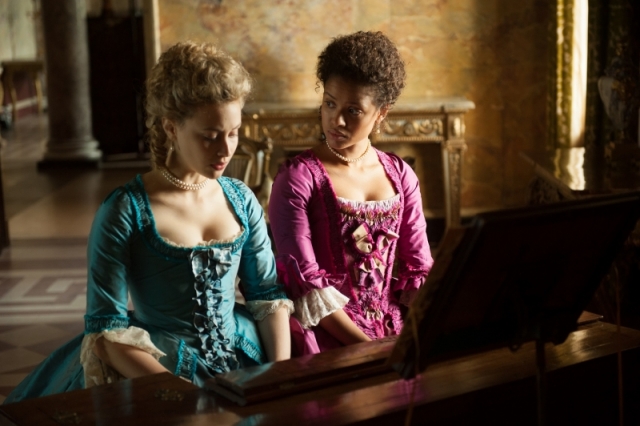 
A well-distinguished, handsomely mounted late 18th-Century drama makes fine use of its British locations, including Oxford, London, and the Isle of Man while making an interesting across-the-Atlantic counterpart to recent Best Picture 12 Years a Slave. Its basis happens to be a 1779 painting that has elicited diverse reaction to its onlookers.

Belle stars Gugu Mbatha-Raw, Tom Wilkinson and Emily Watson in a measured, formulaic, but finally affecting loosely based tale of England's initial biracial aristocrat as its heroine would fit in quite well in a Jane Austen adaptation.

From Amma Asante's confidence with the material in which the scenarist appears to have more than an affinity to it, the director works quite well with his craft contributors, from the costumes, design, cinematography (shot using some of the best that digital has to offer currently) to extend a luminous, painterly treat especially within a country beginning to swirl in change.

After being dropped off at a posh country home by Royal Navy admiral father (Matthew Goode) off to battle, an illegitimate (her mother was an African slave) Dido Elizabeth Belle Lindsay (portrayed mostly in approximation to marriageable age by a very watchable Mbatha-Raw known mainly for her small-screen endeavors) is touched by issues of class, gender, and race while George III reigned. How she navigates among her new family and outsiders with one of the twists perhaps being her sizable inheritance adds a dash of spice which might not be flavorful enough given an obstacle, an exotic one, to climb the social ladder. But also not being able to share with those she considers her own when guests may arrive as disdain often counters the support she receives.

A dichotomy or hypocrisy is sensed from a woman's sentient perspective to relate the indomitable spirit of someone arguably influential on a potential crucial, liberal decision. Wilkinson is the tough-minded William Murray, if benevolent caretaker of Belle, as well as the lord chief justice, having the difficult, groundbreaking 'Zong' case regarding the drowning of 142 diseased slaves with an insurance claim against them on his plate. The poor son of a vicar (Sam Reid) might be Belle's best opportunity for true love among other suitors (Tom Felton) looking for gain with a pronounced viewpoint helping to make an important voice be heard.

Besides the usually charismatic Wilkinson (The Grand Budapest Hotel and The Best Exotic Marigold Hotel), Emily Watson (The Book Thief, War Horse) is a forceful spouse not short on snobbery and Sarah Gadon (A Dangerous Method) rather effective as close, but jealous suitor-chasing cousin Elizabeth. So, courtroom drama and romance in a settling with ethical underpinnings partially felt in a maternal role endowed with devious flair by Miranda Richardson (Made In Dagenham) lets Belle capably boast some high production values with a corseted, curled Mbatha-Raw as Dido lighting up the screen with her quiet dignity.