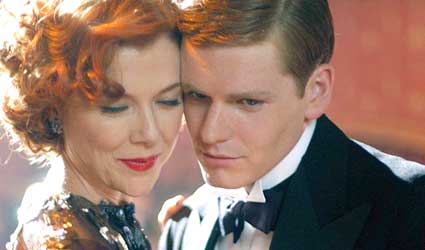 
Think of All About Eve done up lavishly by Merchant & Ivory and you may come up with Being Julia that returns Annette Bening to leading lady status.

In 1938 London, a high fashion period is on display in the Hungarian co-production with fine production values especially from designer Luciana Arrighi (Anna and the King) and costume designer John Bloomfield, also of Open Range.

Julia loves taking in the limelight and the script by Ronald Harwood (The Pianist) from W. Somerset Maugham’s novella “Theater” lets the heroine alternate from domineering and sexy, to loneliness and self-doubt.

Her vanity extends off the stage with much role-playing and the film gives the viewer the chance to understand how perception and reality become something Julia must deal with. The theater producing husband of Julia is Michael, played by Jeremy Irons. She is close to him, but they have a platonic relationship and he has a lover.

Szabo lets Bening get more “promiscuous and chameleon-like” as she understands that she’s becoming “a woman of a certain age.” A man probably half her age, Tom Fennel (Shaun Evans), introduced to her by Michael, is an American admirer of hers. And things begin to quickly brighten for her and her exercising is a wake-up call for Michael.

Being Julia maybe isn’t always an engaging cinematic affair, but as an aspiring actress (Lucy Punch) looks to get a part in Michael’s latest play. Bening has a magnetism in the climax that proves how much she cherishes a part worthy of applause.

And although Szabo allows Bening to reign there is notable support from Michael Gambon as a deceased acting coach, Juliet Stevenson as Julia’s assistant, and Bruce Greenwood (Thirteen Days) as her longtime closeted confidante.