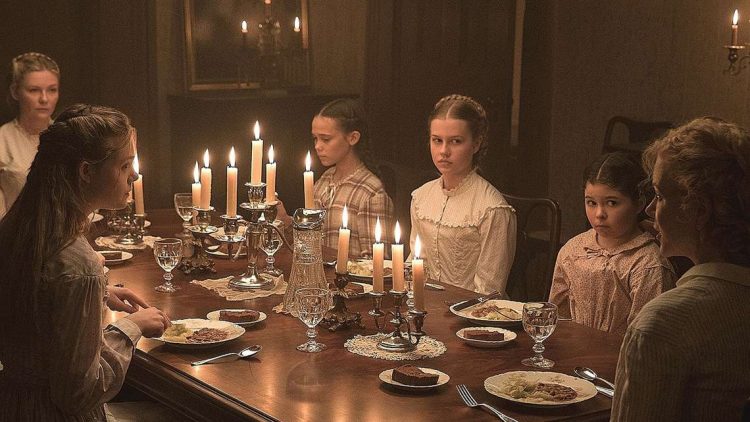 A new form of The Beguiled is veiled with the filmmaker's eclectic, modernistic touch — less caliginous and more of a hazy, surreal languor in accordance with accoutrements and artistic expression provided in Siegel's startling example. With appealing thespians like Irishman Colin Farrell and Aussie Nicole Kidman standing in for Eastwood and Page.

Altering of perspective is key for Coppola's suave cinematic sashaying in the latter chapter of the costly conflict in rural Virginia set at Miss Farnsworth's Seminary for Young Ladies; less of a virile actioner than a grouping of the distaff dynamics not as perceptively shaded in terms of character and drama as more intriguing cinema from Francis Ford's daughter like The Virgin Suicides and Lost In Translation.

Still there is presence in the machinations and vulnerability surrounding wounded (leg shrapnel) Corporal John McBurney (a fine Farrell) and Kidman's prim and stern Martha Farnsworth, as well as French teacher Edwina (Kirsten Dunst) and student Alicia (Elle Fanning) both of whom have shown up in the filmmaker's domain.

The craft contributions are noteworthy to envelop and enkindle the sweltering ambiance with lived-in naturalistic interiors, as well as the nearby bellicose activity on the horizon with light plumes of smoke around the misty moss environs.  Opposite the women in a place where the slaves have already left, Farrell's McBurney has a kind of charm explored in a way that leads to more of a psychological turn amidst the yearning and freedom from not having a man around.

A maturing Fanning, and, especially the much-established Dunst (as evidenced from recent small-screen endeavors), offer some heft in their portraits whether in dining or more intimate moments, with Kidman's Martha tingling erotically. Nevertheless, the bling of a different angle to Cullinan  just doesn't have the kind of ring and resonance  in aiming to make its purpose emotionally eventful and, really, beguiling.