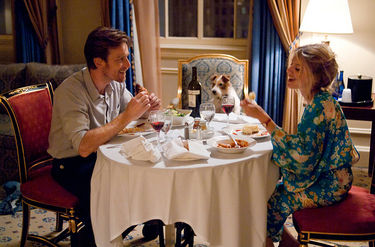 
This rather larger-budgeted independent autobiographical comedy-drama might not be thematically original, in understanding how happiness start at any point in one's life. Yet, it's far better than its cute marketing scheme about lives touched by revelations.

McGregor's Oliver, a wistful graphic designer, was a child with a mother (Mary Page Keller) who was rather permissive and impulsive. She knew that her husband Hal, sharply fleshed out by Plummer, wasn't who she thought he was.

In this bright, off-center foray from Mike Mills, who impressed some with his Thumbsucker, Hal comes out of the closet after a 44-year marriage with his now-deceased wife. This, and an admission of a terminal cancer, floors Oliver, who'll take care of his Jack Russell terrier, Arthur (Cosmo) shortly after Hal passes on. The 75-year-old guy seemingly has had the best time of his life through a relationship with a much younger man (Visnjic).

Mills, through his own talents and personal history, traces these two titular folks as each attempt to put more meaning into their lives. New to the idea of what romance can truly offer, Oliver sees something in an actress named Anna, done with unpredictable panache by Laurent (very good as Shosanna in the revenge fantasy Inglourious Basterds).

The way Beginners connect the past with the present as familial relations shift over time is an artistic, inspiring free-spiritedness in thought and execution. Mills instills a lovely well-shaded intimacy as Oliver talks to Arthur like an adult while getting closer to Anna as well as his late father. The way the scene-stealing canine acts and reacts has metaphorical candor to it.

The filmmaking allows for McGregor (The Ghost Writer, I Love You, Phillip Morris) and Plummer (The Last Station) to rise to the agile possibilities of the plot over usual overcooked studio fare (like Priest or Deception). It's a unique repartee as the sadness traced by a graphic artist (a profession shared by Mills), a costume party with Anna afflicted with laryngitis easily seeing through Oliver, among other interludes reveals the design, opportunity and wit of having a new, inspired lease on life.