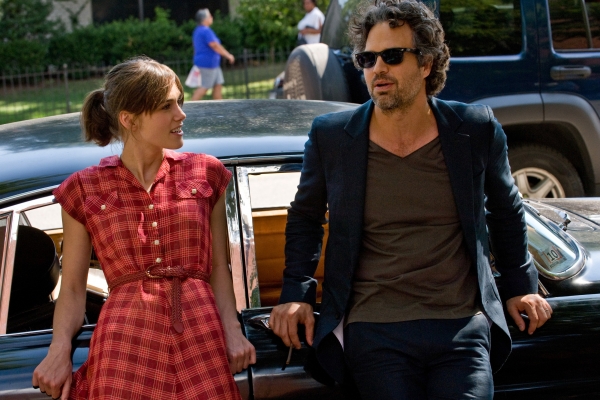 Begin Again has characters and scenes that breathe life into narrative conventionality when songstress Greta (Knightley) dumped by on-the-rise rocker boyfriend Dave (a solid Adam Levine) is persuaded into participating in an open-mic night at a bar. That's where flailing music producer Dan (a rumpled, hirsute Ruffalo) sees the potential in a recording artist. They get the chance to produce music thanks to Dan's record-label boss (Mos Def, credited here as Yasiin Bey) who's given him bad news of late.

Self-assured, yet desperate marks Ruffalo's Dan which is quirky, if pretty intriguing opposite a spunky, talented, even effortless Knightley which has an ad-lib vibe about it. It's about lost souls elevated by music as Dan is trying to make amends with distant wife (Catherine Keener) and teen daughter (Hailee Steinfeld of the recent True Grit). Discovering and revealing raw gift and passion around the troubled and emotional ups and downs is something Carney has a knack for but not that much in a gimmicky way. James Corden's busker is good in an undemanding side role while Keener, Bey, and Levine especially adding more stakes to the proceedings.

Maybe Carney doesn't make the tunes and narrative as beautiful as he did Once before, but a regretful longing points at a changing industry with fabricated celebrity even as Begin Again isn't always smooth with its familial conflict and potency of the performances to infuse what isn't romance but still a winning love story in its own right.