Before the Devil Knows You're Dead 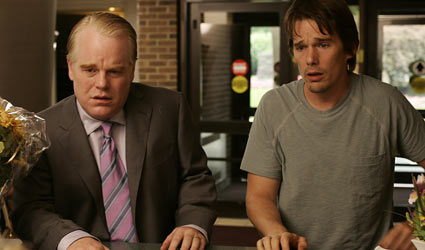 The viewer is quickly pulled in at the outset with a graphic encounter, as Before The Devil Knows You're Dead pivots around a botched heist.

Hoffman, as few may recall his work in films like Owning Mahowny is on the high end of a real estate company. Things are not going well with him and his wife (Marisa Tomei).

Hawke is his pathetic younger brother, put down by his former wife (Amy Ryan) as he is unable to provide child support payments. The older brother has what seems to be a harmless, very profitable scheme.

Unsettling, yet hard to look away like a bad car accident, Before the Devil consistently uses its narrative device in a strikingly stark way. The octagenarian helmer is up to the task with his lenser and editor to get the most out of his cast and the emotions of the characters whose points of view provide more insight.

Besides Hoffman and Hawke doing much shifting on the moral compass, Tomei and Albert Finney as the hard-boiled estranged dad provide sharp backup.

Lumet hasn't fared as well late in his storied career like an Eastwood or the late Robert Altman, but he has come up with a small gem that brings out the devilishness in these conniving New Yorkers.