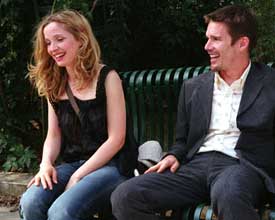 Before Sunset, directed by Richard Linklater, and starring Ethan Hawke and Julie Delpy, is a lot of talk that makes for an ideal date film.

This triad, who serve as the scripters, have re-teamed from Before Sunrise to make a romance similar to the effect of Lost in Translation, which also hardly had nary any physical contact between its leads.

Its been nine years since Hawke’s young American, Jesse, and Delpy’s French student Celine had quite a fling for a few hours in Vienna. They promised to continue their one-night stand at the same place six months later. We learn that there rendezvous never took place.

But Jesse, a writer penned his experience of his time together with Celine, and she turns up at his book signing at the English-language bookstore, Shakespeare & Co. In just a few hours his plane will whisk him back to New York. So, there’s time for them before driving to the airport.

Linklater likes experimenting in real time with his couple in this intimate eavesdropping of camera-work. It took just over two weeks to film and the lensing is polished and hardly intrusive given the budget. The cutting is kept to a minimum and one senses at times that this seems like an independent verison of Sleepless In Seattle.

Hawke and Delpy arguably look better nearly 10 years hence and their rapport is quite good given the dialogue between them that makes up Before Sunset. Items discussed between them question where they are headed as a couple though Jesse is married with a son and Celine is quite fond of her boyfriend. Their meeting manifest how easy they are able to talk to one another, whether about personal issues, or what direction the world is headed.

The story brightens from the sub-text and leaves open the idea that is’s not really serendipity between the two of them. A continuity is palpable from Sunrise as one learns of Celine and Jesse living in New York at the same time but failing to run into one another. Their first encounter has enriched each other and Celine has composed a song about it.

Before Sunset is a softly tantalizing tale that is very romantic as Linklater appears as controlled and assured in his element as ever. And Hawke and Delpy are charismatic bringing much nuance to their characters during a running time often seen in animated films. It embraces the chance for two people to continue a search that may never happen again and Delpy’s singing near the end encapsulates the importance of their unobtrusive, surprising sweet first time together.