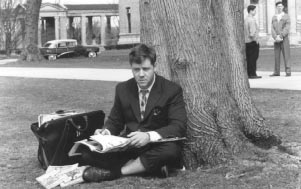 Howard was able to capture the essence of a story and make it entertaining for viewers in Apollo 13.  If Howard doesn't have the services of Tom Hanks, Crowe maximizes the internal volatility and mathematical prowess of John Forbes Nash, Jr. as Akiva Goldsmith's fictionalized script is based on the autobiography of the 1994 Nobel Prize Winner from Sylvia Nassar.

Howard does well balancing Nash's academic life with his social one as the film covers nearly 50 years of a man who still to this day walks to work as a Princeton professor.

Nash looks like the "mysterious West Virginia genius" who looked a bit odd and was into himself as A Beautiful Mind begins in 1947 Princeton.  Goldsmith has dialogue that Crowe can articulate with subtle insights and wit as this drama again depicts the power of the human spirit and the importance of love to live out one's dream.

Jennifer Connelly, as the lovely Alicia Larde - a key supporting character, helps to make Crowe's performance that much more poignant from Alicia's obligations and courage to picture how John can really be.  The conflicts which arise when a genius exhibits schizophrenia and paranoia lifts A Beautiful Mind through a genuine emotion that comes from within.

Howard's film doesn't emphasize Nash's abilities through special effects like many other films, but two scenes which underline a visualizing process that give him the foundation to make breakthroughs on game theory.  At first, he is able to make an analogy of a student's turgid tie into patterns associated with prisms and formulates more ideas from the sight of hungry pigeons.

Nash has trouble fitting in with classmates as one of them, Josh Lucas' Hansen, makes the genius miserable doubting the logic of the game.  But Nash isn't ignored or derided by his roommate, Charles Herman (Paul Bettany - A Knight's Tale).  He befriends the socially uneasy prodigy into having some fun away from the books.

Then A Beautiful Mind follows Nash's pioneering paper which propelled him through Princeton into MIT as a professor, a job which he wasn't good at because he preferred to do research.  A secret assignment from a debonair government agent, done with vigilant presence by Ed Harris, has John doing some vital research on a code.

Howard and Goldsmith make a resonate character-driven picture with Alicia, stunning in a black dress, coming on to Nash and finding his emotional side.  And after they wed and Alicia's pregnant, a chase and shooting while in the car of Harris' shadowy William Parcher leads to a crisis which have doctors diagnose Nash as a schizophrenic.

Crowe unleashes hell on himself as an actor to make Nash at least as compelling as his Jeffrey Wigand, the tobacco whistle blower in The Insider.  If his illness was too apparent at the start, he fully embodies a man who becomes distant at the drop of a hat.

If Connelly's role as Alicia is underwritten, she prods Alicia to confront a delusional genius in a performance which bristles with toughness and compassion, similar to Marcia Gay Harden's Oscar-winning portrayal of Lee Krasner in Ed Harris' labor of love, Pollock.

The photography from Roger Deakins (The Man Who Wasn't There) strongly reflects the eras of Nash's life with the lighting having a yellowish tint at the start and varying based on his illness and attitudes.  Howard works with his editors, designers, and make-up artists for the aging to keep one alert to the way in which Nash looked at the world.  Without making too much of the mathematics and the military ramifications A Beautiful Mind cares deeply about an abstract man who studied equations endlessly and comes to terms to what is much more than a math lesson.