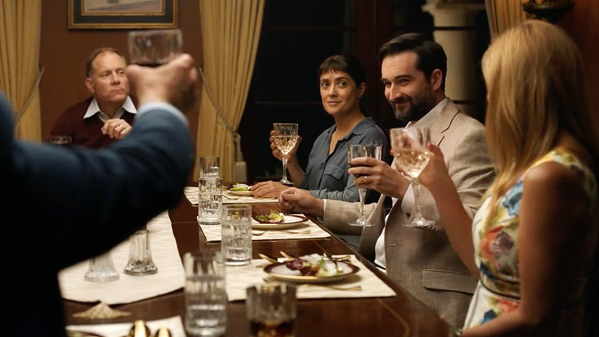 Southern California in all of its lavishness with a little smog from the horizon is on view in Beatriz at Dinner which is Salma Hayek's best role in some time if you consider films like Grown Ups or Savages.

The middle-aged still attractive thespian is the title character, a masseuse and holistic therapist with a love for animals and a Mexican immigrant, who is invited to a dinner engagement (which is set up to acquiesce business dealings) at a home with security, a maid and a couple of chefs when her vehicle breaks down.

Beatriz's opportunity to become part of conversation with the haute couture will let a vegan, pet (and presumably people) lover will take hold after aperitifs, courses, and more adult beverages stimulating her compassion into impassion.

A longing for the life she left in her homeland is evident as the misanthropy and denigration from items like big-game hunting on an African safari or treatment of Mexican workers evinces a despondent fragility in the more diminutive Beatriz that a deglamorized Hayek hones with understated shadings. More so than her co-stars or the narrative itself which doesn't quite deliver the dramatic chutzpah from what ultimately is insinuated. That a woman in a divided country deserves more which is probably what Arteta and White intended.

The hostess is Cathy (Connie Britton) who considers herself a dear friend of Beatriz, especially after the latter has her as client not to mention performing her skills on Cathy's daughter after chemotherapy treatments. Not so much for her hubby Grant (David Warshofsky) in the hotel business with mogul Doug Strutt (John Lithgow, painting a preening, supercilious type who may be modeled after a current Commander-In-Chief). Also, as part of the guest list is Jay Duplass's legal representation for the company in addition to his wife (Chloe Sevigny).

Beatriz at Dinner has some sharp line readings throughout in what loses tension in the homestretch, but Hayek's responses to Lithgow's Strutt with that devilish grin and questioning her citizenship before later brashness commits to an obscure verisimilitude. Which helps make it a palatable, if unfinished entry in a sub-genre to provoke in its platform about society's marginalized.