Beasts of the Southern Wild 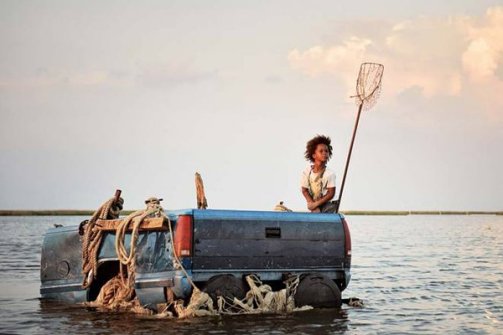 
This uniquely audacious independent film from Benh Zeitlin has a surreal, moving consistent component to it as its 'behind the scenes' could very well be essential viewing. It may not get, but definitely deserves a wider audience when multiplexes are loaded by so many looking to get away from the excessive heat and humidity.

Beasts of the Southern Wild is set in a defiant bayou community cut off by a sprawling levee named The Bathtub - where an impending disaster such as a flood could wipe out such a dipped place.

With some disorienting hand-held lensing at the outset, a staccato, expository monologue of sorts is given by young protagonist - 6-year-old Hushpuppy (Quvenzhane Wallis) who lives with her no-nonsense, if hands-off single father Wink (Dwight Henry), before an austere ecological event puts them in a precarious apocalyptic state.

Here is the kind of multi-genre tale that again splits up loved ones, but turns out to be more poignant and vivid from the aspect of a down-and-dirty Hushpuppy who has the resolve hardly seen of her type with global warming significantly affecting her generation. An activist, so to speak, on the front lines of poverty, she has learned from her father to be inspired to move through the woods or amazingly (if alarmingly) use a flamethrower to light a gas hob. With untrained actors and a very limited budget Zeitlin has made something that will easily stand the test of time.