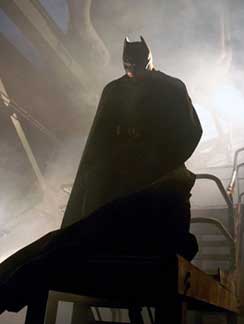 
Batman Begins is filled with bats - they are the first creatures on the screen in this new version of the Batman saga. The dark world on Batman comes through effectively in this Christopher Nolan film (Memento) and brings us into the world of Batman as it was conceived originally.

Bruce Wayne's identification with bats is explained from a childhood experience and his hate for evildoers comes when his parents are killed by a mugger. But the explanation carries further than other versions, here Bruce is with his parents at a concert which he presses to leave (he sees images of bats). His parents take him from the theater via the back alley and are killed as he watches. The sequence is believable, he blames himself for their death.

When the film opens Bruce Wayne is enduring brutality in a prison camp in the far east as he researches evil. The Shadow also trained and learned his unusual skills in the far east. Rescued by Henri Ducard (Liam Neeson) he learns physical contact fighting, sword fitting and control of the mind. But Ducard has dark plans for Wayne and the young millionaire refuses the evil side creating an enemy of Ducard.

Director Nolan approaches Gotham initially from the air with unique camera angles and tells the story of a city in the grip of evil. It is a dark place for a dark hero and the atmosphere is further enhanced by the ominous and driving musical score. Rutger Hauer, the standard evil corporate head has taken control of the Wayne Corporation and the genius of the corporation Lucius Fox (Morgan Freeman) has been banished to a research facility. It is Freeman's Fox that provides the tools for the beginning of Batman. He is similar to Q in the James Bond series, and brings some levity to the film.

Alfred, the family servant, is as close to family as Wayne gets, he supports and assists as the concept of Batman begins. In this film the Bat Cave is a true cave under Wayne Manor and the updated Bat Mobile is thrust through a waterfall to enter and exit.

There are some good guys, Rachel Dawes (Katie Holmes) his childhood playmate is now a dedicated assistant DA and Lt. James Gordon (Gary Oldman) who obviously will become Commissioner Gordon in the future is the lone honest cop. But Carmine Falcone (Tom Wilkinson) is the nasty leader of the crime gang who pails in the light of the true villain Dr. Jonathan Crane (Cillian Murphy) who is The Scarecrow. The deranged psychiatrist's plans will kill everyone in Gotham and Batman has his first battle with true evil.

The film somehow plays real because Director Nolan maneuvers the story in a manner which allows us to easily accept the Gotham world. The long running time moves quickly with no dead spots, and as expected Batman prevails, but as The Scarecrow becomes a victim of his own evil, a deck of cards appears and The Joker is the first card. Expect a sequel, if it's as good as Batman Begins, hope for it.