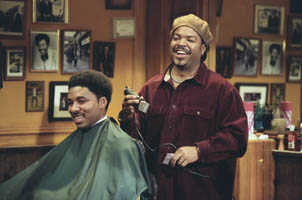 Ice Cube aims to please in this easy-going, amusing comedy.

He plays Calvin, the owner of a barbershop located in a black Chicago ghetto.  The shop is a gathering place for gossip, story-telling, hanging out and playing checkers.  To the neighborhood, it is as one patron describes it, "the black man's country club."

Cedrick the Entertainer is the shop's oldest barber and he loves to gather the younger folks around him to tell how things used to be in the good old days.  Rap star, Eve is the only female barber, but she holds her own against the other guys.  Sean Patrick Thomas plays an educated barber who continually corrects his fellow's work; and Troy Garity is a white barber who dresses black, dates a black girl and wishes he were black.

The shop has the look of a business from days gone by - it began in the family forty years ago.  It has a laid-back, friendly atmosphere and the customers like to stop by and stay a while.  Even though there doesn't seem to be a shortage of customers, Calvin can't keep up his tax payments and wants to sell out for bigger and better things.

There's a steady stream of colorful characters that pop in and out of the store front and a funny duo that steals an ATM machine from a local convenience store and than spends the rest of the movie trying to break it open.

Ice Cube is effective as the owner who's torn between continuing with his father's legacy and going out on his own, and there's enough silly stuff to keep us smiling.