Barbershop - The Next Cut 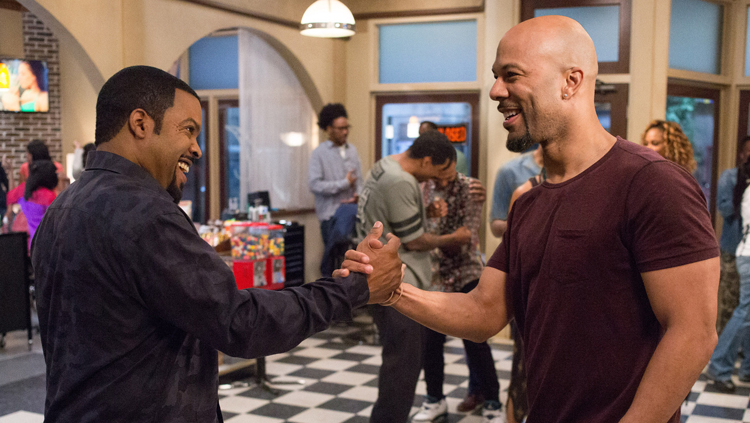 
Barbershop: The Next Cut takes place 12 years after the events of the second Barbershop film.  Calvin Palmer Jr (Ice Cube) is still managing his shop with his crew.  However, rising crime and rampant gang violence has led to the streets of south side Chicago to become unsafe, leading Calvin, and the rest of the crew to try to save their neighborhood.  Meanwhile, Calvin is looking to relocate the shop in order to protect his son from the violence.

The movie carries a very large and diverse cast of characters.  However, to the film's credit, everyone seems to have their moment in the spotlight and even manage to get a few laughs in as well.  Speaking of laughs, this film had plenty of them, the cast played off each other extremely well creating a very authentic environment.  I can't say that there was any characters that I truly disliked.

There are problems however with the movie.  For starters, the film is very heavy handed with it's messages and while none of them are bad, it at times took me out of the film.  While I can concede that the messages are important to have, some may find them distracting moments that pull you out of the film.  It by no means ruins the film, it simply stands out a bit too much.

The ending also came up very anticlimactic.  One of the major plot points in the film is Calvin's son leading a life that could find himself in a gang.  However, the resolution of this seemed all to quick and fell flat for what the movie had been building up since the very beginning of the movie.

All in all, Barbershop: The Next Cut is a movie with plenty of laughs with a good message attached to it, even if it did feel heavy handed at times.  It is a movie that should be watched, especially if you have seen the previous installments as it is a good continuation of the story.