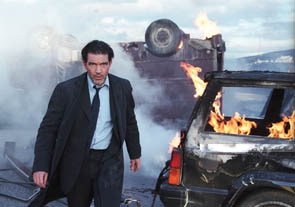 When one thinks of an action film, it is expected that the result of the explosions and destruction will actually have a point and in the process be fun.  Additionally one would expect an adrenaline roller coaster via the fights, chases and explosions.  It is unfortunate that Ballistic seems like more of a highlight reel than a movie.

Starring Lucy Lui as a rogue operative for some government agency and Antonio Banderas as a burned out FBI agent looking to find his wife, Ballistic never gives a clear picture of who is good or evil and why we should care.  The one piece of interest in the film is the object of desire to the government: an injectable remote controlled nano device that causes a heart attack which appears natural in cause - really cool and believable technology!

None of the usual blood pumping main stays work here; the car chases are slow, the fight scenes clunky and unimpressive and the use of fire and explosions WAY over done.

Action or spy films should always provide a somewhat plausible or even impossible scenario, not just explosions and fights as you have here.  We can still hope that the coming release of the next Bond exploits will redeem this type of film.

In short, you are likely to morn the passing of the 90 minutes of your time rather than the fact the film is over with this one.

Remember to keep the popcorn hot, soda cold and watch for me in the back row, three seats in.