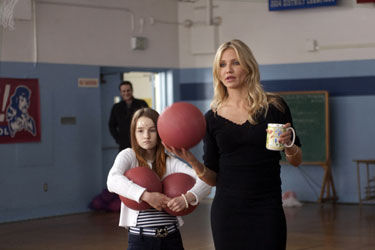 
A new comedy from the director of Walk Hard: The Dewey Cox Story isn't the appealingly subversive, female-driven tale one had hoped from its amusingly rude advertising. One that tries hard from the desirable attributes of its title character, especially if a shot like one from One Night At McCool's is any indication.

Bad Teacher doesn't have the right kind of marriage with its characters and wanton gags, more boxed-in and conventionally situational than a more genuine, lengthy, if similarly sketchy Bridesmaids. In slickly maneuvering its conflict from high school education it would be too much wishful thinking that this mainstream film could have taken a little more of the shape and audacity of the darkly delightful Election.

The main setback which may have many feel like they're being kept after class is leggy Cameron Diaz's gold-digging slacker of a 7th-grade teacher Elizabeth not being the kind of rebellious, nasty woman one expects. One who returns to her middle school classroom to show educational (Inspirational Teacher) movies to her students.

If the model for some could be Billy Bob Thornton's titular repellant character in Bad Santa, Elizabeth's unsavory silliness still doesn't constitute the kind of committed protagonist dropped by her wealthy fiance to be locked in on her students capturing a state contest. Just so she can lure an heir of a handsome, preppy substitute teacher, Scott (Justin Timberlake of The Social Network and Diaz's former off-screen beau).

There just isn't the sassy sardonic touch here, mostly a wackiness of behavior with a showcase of profanely verbal and slapstick. One wildly inappropriate sight gag comes from an expected, if wild encounter between Scott and Elizabeth with Timberlake using the reaction shot to his advantage as much as possible.

Jason Segel, no stranger to this genre (and better in the romantic comedy I Love You, Man), has some modest, wisecracking appeal as a fairly squeaky-clean physical-education colleague of the sarcastically bright Elizabeth, Russell, trying earnestly to earn her affection (though coming off a tad obnoxious). Elizabeth also has to deal with sweet-natured colleague in Lynn, a fine Phyllis Smith of TV's "The Office" and a standardized test person (Thomas Lennon) to help get her way.

The screenplay from Gene Stupnitsky and Lee Eisenberg doesn't convince in the characters motivations and how they embrace their machinations, as helmer Jake Kasdan (remember Zero Effect with Bill Pullman) is unable to temper the mood well enough to endure the scheming of a booze-swilling cursing pothead in Elizabeth (someone like her in reality wouldn't give the male characters around her the time of day). A heedless manner from an inability to connect to some kind of acerbic darker wit is reminiscent to John Michael Higgins's principal.

Attempts at cruelty are too often impugned by the need to live up (or down) to its moniker. Like a too childish and preppy Timberlake, Bad Teacher presses too much to impress as it's sanitized in its raunchier yearnings with little insinuation or underpinnings. Even a still quite attractive Diaz, who failed to impress in The Green Hornet and Knight & Day, while pushing a ballsy, sexy attitude over a necessity of an occupation, isn't able to much more than as predicated by far less substance than her time with the Farrely Bros. in the gleefully outrageous There's Something About Mary.

Ultimately, what is less offensive than expected uses its high-concept nature better through the support of Lucy Punch (Dinner For Schmucks). As lively, overachieving colleague Amy showing much more consistent passive-aggressive moxie and humor in dialogue and physicality, Punch winds up at the head of this too often unfunny, weakly formed paradigm of crude class. One, similar to Diaz's snarky turn and the storyline itself, that appears at odds with its rather irreverent, loose self.