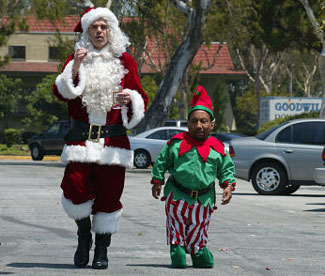 Bad Santa doesn't live down its title. Billy Bob Thornton leads the anarchy against the Yule-time cheerfulness in ways that make his Sling Blade character cuddly.

A static road movie that "blends the irreverence of South Park with a dash of A Christmas Carol" is a ball-buster in terms of attitude toward storytelling, character and crude language.

Having the word "bad" in the title usually means that kind of box office, except for perhaps for Bad Boys, in the last decade. Thornton gets to drink, swear and have sex in a Santa suit as well as being seen wetting himself. He is a naughty man in a red suit involved in a heist. He's been doing it from year to year and after getting the job done in Milwaukee, it's off to Phoenix after drinking in the tropics for a year.

This dark comedy may have adults believe they are accompanying their kids to a Santa movie they will see incessant crude humor and inappropriate behavior toward kids to watch. There probably are many out there like Thornton's repulsive Willie who gets called pathetic and a lot worse by his partner in crime, Marcus, a black elf, performed in an indulgent manner by dwarf Tony Cox. Marcus uses his diminutive stature to get into the store after hours so the slatternly safecracker can net a nice Christmas bounty.

The kid-unfriendly plot has Willie holding up in the mansion of a gullible, snot-nosed charitable kid (Brett Kelly) who bugs him about Santa but is really looking for a father figure since his is in prison. The kid is "watched" by his catatonic, sandwich-making granny, a wasted Cloris Leachman. Some may think that Willie may have a change of heart as the pudgy boy believes that there is good in him.

Some of the most profane, outrageous moments occur in the mall where Willie and Santa work. The late John Ritter is the uneasy mall manager suspicious of his new Santa when he eavesdrops near a "Plus-Size" dressing room. Except for Cox, no one can really stand up to this offensive lout. Bernie Mac is the stubborn, blackmailing mall security officer who chain-smokes and dresses like a ladies man. The disaffecting tone extends to the carnal power Willie has over a bartender named Sue (Lauren Graham) who's got a thing for Santas.

As in his Ghost World and Crumb, Zwigoff works off of alienation in underground-like fashion and the vileness is evident in the production. There's a simple-minded nature to it all with all the characters attacked in various unpleasant ways. Bad Santa is ambivalent and disarmingly wry in venting out obnoxious answers to holiday sentiment.