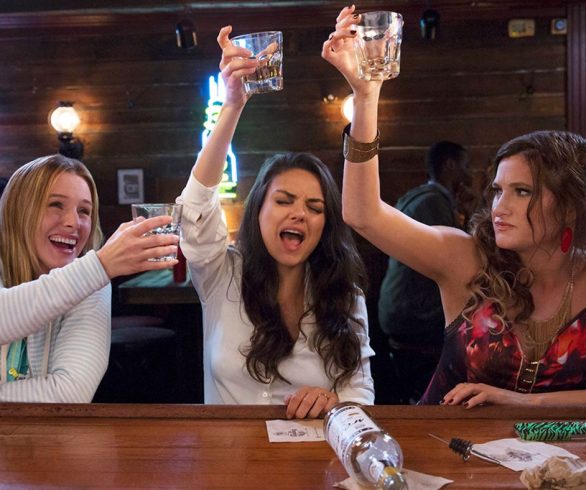 
Instead of concentrating on men behaving badly, writer/directors Jon Lucas and Scott Moore (The Hangover), focus their new comedy on three moms going for it.

Mila Kunis plays Amy, a married, mother of a pre-teen boy and girl.  She helps with homework, drives the kids to school, attends their after school activities, works full-time at a job at a coffee company, where she is only hired to work part-time and hurries home to cook her family dinner.  She's stressed out and always late.

After a particularly bad day where everything went wrong, including a fight with her slacker husband and a confrontation with nemesis, Gwendolyn (Christina Applegate), the obnoxious president of the PTA, Amy reaches her breaking point and takes off for a local bar.  There she meets Kiki (Kristin Bell), a harried mother of four, and single mother Carla (Kathryn Hahn).

After a few drinks and some heart to heart talks, they decide that they're tired of trying so hard to be good moms, and that they'd like to just once be bad. Although, Carla doesn't really seem to have ever been a "good" mom.

With her new found liberation, Amy tells Gwendolyn that she's going after the PTA presidency and sets out to win over the other moms by throwing a big party.  The women dance, carry on and drink too much - not as bad as their male counterparts, but believe me, these women can be every bit as raunchy.

Mixed in with the profanity and sex talk, there's a pretty good message about parenting and growing up here.  The four women are funny, talented and have really good chemistry,  however Jada Pinkett-Smith is totally wasted in a tiny role as one of Gwendolyn's cohorts.