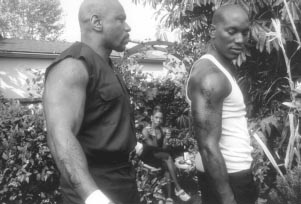 John Singleton completes the trilogy of his "hood" films with Baby Boy that returns him to the rough streets of South Central Los Angeles, maybe not so unlike the New York City in his updating of Shaft last year which gave Samuel L. Jackson an opportunity to be an heir to the ultra-cool black cop of the 70's.

This companion piece to 1991's Boyz N the Hood doesn't plug into the gang aspect of growing up, as it more closely examines the familial ties, strained as they can be, for a young black man entering adulthood.  Here, Singleton's lead, rather charismatic character is Tyrese Gibson who plays Jody and Tyrese as he is known in entertainment circles with his TV and modeling background is a cross between the handsome Taye Diggs and some of the fiery angst of Mekhi Phifer.

As Baby Boy starts, a grown Jody who is haunted by what has tormented his family, the shooting of brother Ray when kicked out of the house by mother Juanita (A.J. Johnson).  Jody is chronologically grown, but called a baby as he's a mama's boy, unable to break away, to manage a stable financial life for himself as he has fathered two children by two different women.

Singleton emphasizes the immaturity and irresponsibility of Jody who often hangs out with his equally vocationally deprived homie, Sweetpea, played by Omar Gooding, Cuba's younger brother.  You get a good understanding how rude and selfish these childish guys can be as they disrespect family and women, exuding a coolness that has a droll effect on viewers.

One wonders that Jody's bellicose manner is due to the fact that he's constantly insulted from staying steadfast to his mother whom he feels needs protection because of Ray.  And that fear has held him back from being a man and leaving the nest.

Some of the best moments of Baby Boy occur with the unstable triangle of mother, new boy friend, and son needing to get things out in the open.  And Singleton underlines his fatalistic, pessimistic attitude of the inner city black male and it becomes clear that Jody really doesn't have a bad attitude.  His visions of imminent demise turn out to be less haunting than first envisioned, but Singleton uses this nightmare to some cinematic, therapy for his tripping, rather self-defeating brother.

The story of Jody and Yvette takes Baby Boy in a tangled, pained romance with moments of sexual ecstasy, but it gets protracted and repetitive for an audience to find gratification in their explosions of hatred and lovemaking.   Taraji Henson fills Yvette with equal amounts of suspicion and tenderness as Singleton tries to be sincere in the tenet of trying to make a relationship and have both parties grow up in the process.  Yvette sucks her thumb and Jody is loyal to being his mother's keeper and not wanting her to get beaten up by the likes of (O.G.) Melvin, with the young mother having earlier destructive relationships.  And that probably, besides Ray's tragic death, has psychologically kept Jody like a baby, dependent on his mother and friends with Sweetpea who keeps him street-smart and close to the criminal world.

Considering the acting talent assembled by Singleton, one wished more screen time for Vic Rhames, though he has his moments.  And Tyrese is pretty appealing despite the surliness that he often projects as Juanita tells him that everyone's using everyone else and "watch your back."  There is a lot of anger and meanness in Baby Boy but Singleton uses it as a path to redemption through a gradual change in direction.

As the drama shifts in scope in conflict moving out of the home environment to the streets, Baby Boy doesn't nearly rank with Boyz as Snoop Dogg's Rodney scowls and acts nasty and the ultimate showdown lacks tension.  It isn't as potent and thoughtful for the audience as it is for the actors themselves as the intensity is more on an internal level.  Thus the finale seems to clean as Baby Boy never needed to take any risks to make a visionary, powerful coming of age film for contemporary life in the hood.