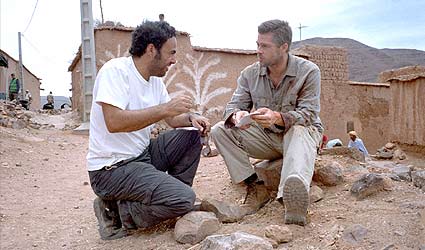 
A politically relevant, emotionally gripping movie, Babel crosses countries and cultures with soulful passion as Alejandro Gonzalez Inarritu's trilogy concludes with a flair for what's going on in our post 9/11 world.

Inarritu's most commercially-realized effort to date has as its most identifiable actors being Brad Pitt, Cate Blanchett, and Gael Garcia Bernal, the latter in the director's stunning, sprawling debut, Amores Perros. Similarly, Inarritu and his collaborating scenarist Guillermo Arriga (The Three Burials of Melquiades Estrada) command close viewer attention as multiple storylines are woven together in an intricate, telling way.

Shot in Mexico, Morocco, and Tokyo, Babel is a rich, dazzling tapestry that delivers on its thematic ambitions, two of which are loneliness and isolation. The use of a shotgun by sons of a goat herder sets things in motion that prove unforgettable when the images, languages, and faces are connected in a deliberate, riveting way.

A Mexican nanny (Adrianna Barraza) and a young Japanese deaf-mute, desiring, desperate woman (Rinko Kikuchi) are important to the proceedings where fear and frustration touch all of the characters in some way or another. Pitt and Blanchett are deeply committed to their roles where more strife has come their way while on a tour bus.

The Tokyo part of the equation may be the most revealing and hardest to fit (at least for a while) to the big picture which is heartbreaking and poignant given the vastness of the suffering where border patrols and the threat of terrorism looms large.

Inarritu's versimilitude and vigor is evident in a film replete with familial relations in need of nurturing or repair. A stellar production excels especially when it comes to the use of sound, from a guitar to a discotheque, and the sharp editing by Stephen Mirrione.

A definite contender this awards season, Babel has a mesmerizing mobility to it that ironically comments on the inability to communicate with those closest to us, as well as ourselves.