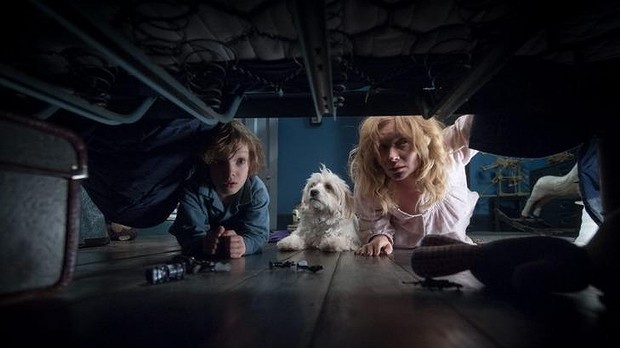 
A horror movie that's quite piercing and smart is rare these days, even better than the recent Oculus (way better than the opaque Ouija) and nearly as stirring and stellar as the more mainstream tale of  The Conjuring. With a gothic-styled setting which is prevalent in the interior designs with dark grey hues. Of course, even in the basement where one's personal belongings are kept.

Jennifer Kent's The Babadook on the surface might seem like your typical monster movie, yet doesn't rely on the gotcha stuff so common in a genre ideal for a medium keen to nastiness. That's done with acuity in part because of the same approach of the James Wan aforementioned chiller with less than cutting edge camera techniques when it comes to shutter, time-lapse and lighting effects.

But, her affecting storytelling has a mercurial quality that examines human fragility and mental illness as exuded by determined realism from its two key players, Essie Davis (Legends of the Guardians) and much younger counterpart Noah Wiseman.

Over half-a-dozen years since the violent passing of her husband (Benjamin Winspear), Amelia (a remarkably gloomy Davis) is hardly well-rested thanks to monster-loving son Samuel (an ululating, occasionally wide-eyed Wiseman) and is prescribed tranquilizers. A tautness around impassioned childhood yearning is realized by filmmakers who allow the characters to divulge a lot about themselves. Perhaps to an unnerving level well after Samuel's nature has left him socially incompatible, from schoolmates to family members. Even to freak-out proportions not just in startling, but witty ways.

You feel a haunting jadedness through the lingering lamenting deliberations of Davis as Wiseman's raging naturalism from a steadfastness to the titular, blazoning and menacing creature (Tim Purcell) infiltrating their life in prowling pop-up book fashion. And, Kent stages many scenes that transpire with a creepy presence which prove oddly involving given what's unresolved, painstaking, and too much too handle on their own. Especially as Amelia becomes attuned to her son's seemingly sensationalized surges.

Yeah, The Babadook might seem to the casual on-looker like another flutteringly frenetic boogeyman fright fest. But, in a reasonably short run-time it honestly makes the heart race with relevant psychological impulse throughout all the banging and rattling, as well as Samuel's incessant, if eerie screeching.