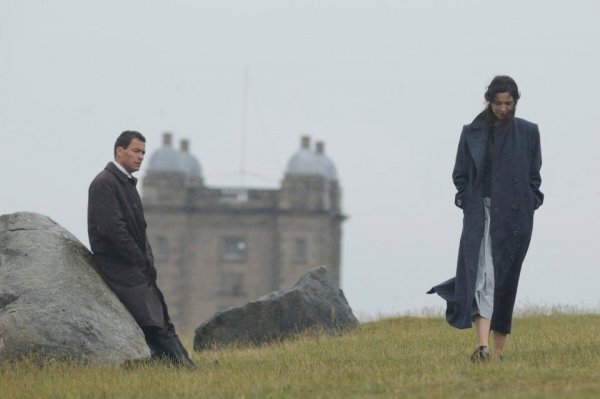 
A fine Rebecca Hall (Please Give, Everything Must Go) leads this moody supernatural thriller as a debunking author who provides enlightenment about those who take advantage of  many London mourners of WWI (and the flu).

Her Florence Cathcart in Nick Murphy's The Awakening has a reputation who catches the attention of schoolmaster Robert Mallory (Dominic West of John Carter) to help her look into his countryside boarding school after the loss of a student. The tale hinges on the unveiling of a presence that inveigles Florence through her initial skepticism.

Hall (in a script that Murphy helped devise) is a fleshed-out character where her tenets will ultimately reach a crucible; the way Florence is drawn out, the mystery and periodical jolts factors play out in fairly effective fashion as her and her apprehension is easily embraced.

West is part of roster that offers decent support (though maybe not in the romantic department after Robert noticed by Florence). Other contributions include a suggestively subtle Imelda Staunton (Pirates! Band of Misfits) as the school matron, as well as Isaac Hempstead Wright as an unattended withdrawn young lad and Joseph Mawle as a shudder some jack-of-all-trades not so keen on Mallory.

With enough precision and delicacy into a genre laden with possibility as one is also reminded of the 2008 Spanish horror fantasy The Orphanage, The Awakening holds up for the most part from the way Hall helps to make it a watching affair. Yet, there is an abatement on the necessary chill factor when it comes to a back-ended weighed-down narrative that even after the denouement and through the epilogue that echoes too much of uncertainty.