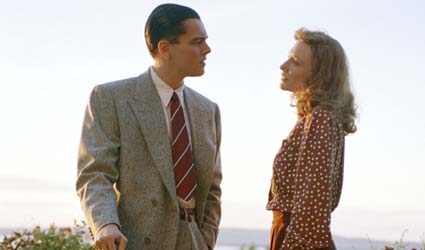 Martin Scorsese re-teams with Leonardo DiCaprio to captivate in a rip-roaring fashion the pioneering industrialist billionaire Howard Hughes in The Aviator.

After failing to convince audiences and many critics with his ambitious, sprawling Gangs of New York, Scorsese surely has the goods on this larger-than-life eccentric that is one expansive, highly impressive slice-of-life.

This limited biopic, though nearly three hours, is swiftly paced as Scorsese again works wonders with longtime editor Thelma Schoonmaker. DiCaprio pins down the swagger of a very complicated man in a lively, driven performance that has the making of another Oscar nod, quite possibly one of many in a detailed, pristine recreation.

Scorsese’s technical aplomb definitely takes flight as The Aviator takes one right into the filming of a dogfight epic “Hell’s Angles” in the late 1920's, reshot for the advent of sound. The massively expensive picture was produced from the Hughes family drill bit company dollars.

The screenplay by John Logan has a terse, but important childhood scene that will leave an imprint on this man with such a keen mind into how airplanes function and go faster. It shares a similarity with the more bloated Alexander in how a mother can not always be a safe source of comfort. Hughes would become partially deaf from his efforts to break a speed record, which he does followed by a sudden landing in a beet field.

Gwen Stefani has a noteable cameo with two lines of dialogue as Jean Harlow, Hughes’ celebrity guest at the picture’s gala opening. They party in one of the film’s lavish designs complements of Dante Ferretti at the Cocoanut Grove nightclub. His many aviation aspirations including the take over of TWA are balanced by his love interests which include strong support by Cate Blanchett (Veronica Guerin) as Katharine Hepburn and the stunning Ava Gardner, acted with sass by Kate Beckinsale (Pearl Harbor). There’s a visit to the Hepburn family estate for a meal and Gardner refuses a sapphire necklace from Hughes saying “you can buy me dinner.”

Scorsese has the film look and feel like it was being made though the use of some digital technology and archival newsreel footage. One harrowing sequence tautly staged is a plane crash in Beverly Hills that shattered nine of Hughes’ ribs and moved his heart to the right side of his chest cavity.

The narrative incorporates events into the war years and shortly afterward with Hughes’ mental state elevated to repeating phrases as he creates a “germ-free zone” in his screening room. DiCaprio looks the part as he appears in public hearings for war profiteering before Senator Own Brewster, a fine Alan Alda, who's in cahoots with Pan Am sly rival Juan Trippe, another intelligent supporting role for Alec Baldwin (The Cooler). DiCaprio has good moments with Baldwin and Blanchett when he talks to them behind a closed door as he feels cornered physically and psychologically.

More than adequate backup is provided by John C. Reilly as Hughes’ right hand man, Noah Dietrich, Matt Ross as Ode his plane designer, and Ian Holm in a funny turn as a meteorological professor from Columbia University.

The lush cinematography from Robert Richardson along with vibrant, but hardly overwhelming music from Howard Shore reinforces the fact that Hughes was more comfortable in and around aircraft than social circles. Scorsese and DiCaprio make this visionary a compelling, sympathetic character who washed his hands till he bled and wouldn't leave a seemingly spotless bathroom until someone else entered and opened the door for him. A naive inheritor who sees strange cleaning people who work for him really worked to get his “Hercules” “Spruce Goose” giant plane off the ground. And, it’s a shame because the man who thought of jet commercial airliners could have done so much more.

This may be Martin Scorsese’s best shot at being on stage during the award season. The Aviator, which captures Howard Hughes’ life from 1927 to 1950 brings us through some of his romances with Hollywood starlets and his aviation world battles. It is filled with beauty and tension.

One can’t help but observe the parallels to Charles Foster Kane (Citizen Kane) who spent wildly from his fortune as does Hughes from his drill bit inherited company. Hughes and Kane both were traumatize by their mothers. Agnes Moorehead sending Charles to foster care leaving him with only the memory of “rosebud” for security. Hughes’ mother convinced him as she scrubbed his body that bacteria is all over and “quarantine” could happen to him if he was infected. That warning brings him to fits of irrational behavior and his reclusive reputation.

Hughes had a wonderful playground his brilliance allowed him to reach for future levels of technology as he imagined future flight, but he played fast and loose with experimental designs and dangerous crash landings - one in a beet patch the other nearly taking his life as he was severely burnt and crushed.

In Hollywood after leaving his home town of Houston and the tool company in the late twenties he forged the film “Hell's Angles” over three years making the final change by adding sound after watching Al Jolson singing on the screen.

At the Chinese theater for the opening with Jean Harlow (Gwen Stefani) on his arm we are part of a scene that is a vintage adoration by fans that looks just like Singing In The Rain.

Scorsese has managed the life story and he has conquered the period in a stunning remake of rooms, halls, homes, street, clothing, movie houses and cars accompanied by vintage music some of which comes from The Ink Spots.

It not only looks real it feels true and we become fortunate observers of the great Hollywood era when the illusions were protected and at least sustained in most cases. Hughes battled the national rating board over The Outlaw in which Jane Russell was perceived as exposing extreme cleavage, through his background in engineering he uses mathematical tools with pictures and calipers along with a stress analysis to argue his point.

Leonardo DiCaprio captures the look of exuberance and irrationality of Hughes as if he had been there to observe the film maker-business man.

Kate Blanchett plays Katherine Hepburn a bit too strong but convincingly as we observe a dinner in which Kate’s sophisticated society family implies Hughes is not up to the northeast standards they expect. Kate Beckinsale is right on the money as Ava Gardner, the stunning beauty who made it clear she could not be bought. His relationship with Faith Domergue (Kelli Garner) began when she was 15 and a knock-out. But his sophisticated love style lead to an attempt to run-down Gardner. Domergue by the way made a number of B films in the fifties most notably This Island Earth and Cult of the Cobra.

Scorsese requires us to recognize the generosity and insanity of an exciting man with means to get his way. To that end we see brilliant exciting moments in flight both for The Aviator and Hughes’ films within. Scorsese also makes Hughes a hero against the strong hand of Juan Trippe (Alec Baldwin) from Pan-Am who conspired with Senator Owen Brewster (Alan Alda) of Maine to keep only Pan-Am on international flights blocking the Hughes TWA franchise. That battle is similar to the one in Tucker who battled with Michigan Senators and the established auto industry. Further he brings us to the dark world of Hughes’ mind and the posh glittering world of Hollywood when it was absolute king.