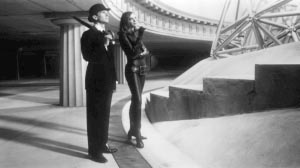 This Warner Brothers film, based on the British television series that ran in the U.S. from 1966 to 1969, brings back the dapper spy and his karate chopping partner.

He's dressed impeccably in the same suit and jaunty bowler as his predecessor, Patrick Macnee,
and she's wearing the same skin-tight black jumpsuit as the popular Diana Rigg, but that's as far as the similarities go.  Fiennes and Thurman seem stiff and uncomfortable with their roles and their repartee is strained.

Connery as the evil De Wynter could have been a hoot, but he isn't on screen long enough to shape his character.

Some of the sequences seem out of sync and unexplained.  One scene has De Wynter holding meetings with his cohorts who are dressed in giant teddy bear costumes to keep their identities secret.  However, when they're unmasked, the audience has no idea who they are or what their connection to the plot is.

Whenever the action runs out of steam, it seems that characters resort to sitting down to a spot of tea, which seems to happen quite frequently.

There's nothing terribly wrong with Fiennes and Thurman as The Avengers, except that the fun is missing. They are perfectly dressed, perfectly proper and perfectly boring.