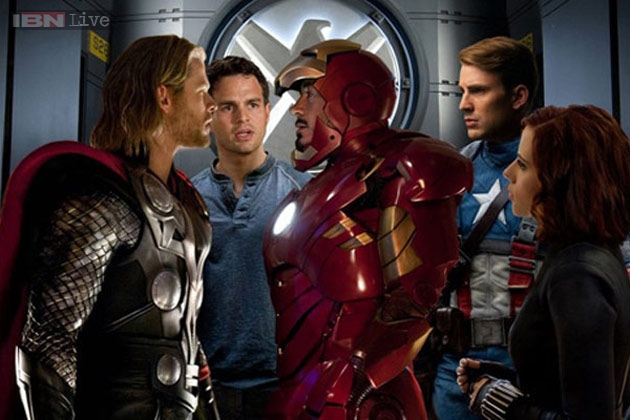 
Sensory overload easily describes Avengers - Age of Ultron.  The film is a non-stop barrage of superheroes vs. bad guys for  2 hours and 21 minutes. From the very beginning, we see the Avengers attacking Baron Strucker's mountain stronghold. Bullets are flying everywhere, yet it's only the enemy getting hit. Once it awhile we might see a scratch, or slight flesh wound on one of the Avengers. It appears they are as invulnerable to injury as the mighty Superman.

Corny jokes aside, Director Joss Whedon knows what his fans want. Whedon gives them more than enough action. Sadly, his story is as light as a feather. Whedon could have easily been titled it : The Avengers Save The World: Part Two.

Destruction is everywhere with thousands of civilians in their path.  Yet, we never know how many of them were killed or injured along the way.  It's just business as usual for the Avengers.

None of the other Avengers seem overly concerned with the fact that it was (Iron Man) Tony Stark who unknowingly created Ultron. Stark was secretly experimenting with Loki's powerful scepter when all hell breaks loose at Avengers headquarters. Yet, Stark is never held accountable for all of the carnage that follows.

Battle after mindless battle rage on continuously throughout. The only real downtime is a small interlude at Hawkeye's farmhouse where the Avengers re-group.

There is just too much action going on at once to make Avengers: Age Of Ultron a truly enjoyable film. It reminded me of last years' Transformers, Age of Extinction. All style with no substance.