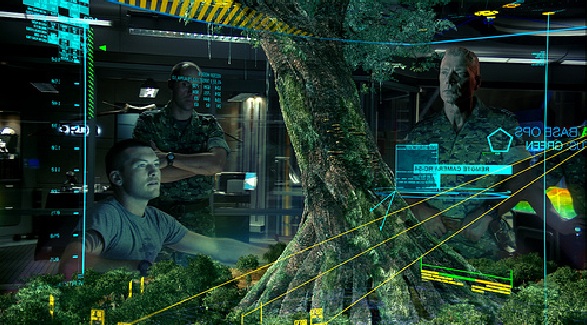 
James Cameron looks to be the "king of another world" in this absorbing, highly imaginative 3D interstellar epic adventure, the most expensive motion-picture to date.

Cameron (on a long hiatus from feature filmmaking) has reportedly thought about the making of this film for most of his life - in conception for about 14 years. It delivers a fully immersive cinematic experience of a new kind, where the groundbreaking technology created for the film disappears into the storytelling and characterizations.

The filmmaker's high-minded eco-fable is set in 2154 where Jake (Worthington) is a paraplegic Marine relocated to Pandora, a planet that is part of a special titular project.

In time he's in an unfriendly place in the genetically cloned body of the Na'vi, a blue-skinned species about three meters in height with a tail and unique ponytail. In the jungle, Jake is helped by Neytiri (Saldana, very good in Star Trek) who makes him understand the Na'vi life. However, tension arises as those who've put him on this mission want him to displace the Na'vi so they can use their land for the rare Unobtanium. The unknowing, reluctant Jake embarks on a journey of discovery and redemption, finally leading a gallant battle to save a civilization.

The film has a viable historical connection to it, going back to when Native Americans were dealt a major blow by European colonization. And, the corporate military might echo contemporary strife on a global scale. Lang's imperialistic Quaritch and business-mined Selfridge (Giovanni Ribisi) are looking at what is at stake against a distant planet's indigenous population. But there are scientists (Weaver, Joel David Moore, Dileep Rao), a rebel fighter pilot (Michelle Rodriguez), Neytiri's tribe-ruling parents (CCH Pounder and Wes Studi), and premiere Na'vi warrior (Laz Alonso) who are on a different wavelength about plundering for success.

While the story and characters may be secondary to the resplendent visuals, especially in the first half of the picture, there is some subtlety and turns to both with Worthington and Weaver doing well in a blithe, cynical mode as the action intensifies. The romance between Jake and Neytiri is plausible enough as a pacifistic sentiment takes hold within a halcyon of not so dissimilar species.

Avatar may be dismissed by some as a kind of meaty, video game juggernaut, but there is enormous sophistication from the photorealism of the settings and creatures ideally viewed in IMAX/giant screen 3D venues. The sheer presence of this heavily animated wondrous uncondescending vision will be striking, especially to those inspired by motion-capture techniques, like Robert Zemeckis. Cameron knows how to generate and stage excitement and terror as he's proved in movies like Aliens which also starred Weaver. His reemergence has the buzz and the gripping sweep to be a force in the upcoming awards-laden season even if the box-office returns may not be that of Titanic proportions.